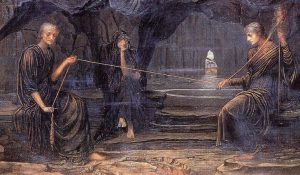 The three daughters were born of Gaia (Mother Earth), who conceived them in the drops of blood from Uranus (Father Heaven) that fell upon her body when he was castrated by his son Cronus with a jagged sickle made of adamant.  Ouch.