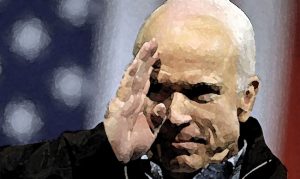 After five and a half years of captivity and horrendous torture in North Vietnam, John McCain finally came home. His body was broken, but not his spirit. McCain was left permanently disabled and was unable to raise his arms above his shoulders.

And yet, according to “President” Trump, John McCain was a bogus war hero, and he made a mockery of his years of torture and captivity: “He was a war hero because he was captured. I like people who weren’t captured.”

Mr. McCain said nothing in response. How many people would have been able to do that?

I wonder how long Trump would have lasted as a prisoner of war in Hanoi?

Oh wait, he was a draft dodger and received five deferments during the Vietnam War—four for education and one for bad feet. Aw, poor Trump had bone spurs.

John McCain endured among other unimaginable torture: Bayoneted in the left ankle and groin, a broken shoulder as a result of a rifle butt, suspended by ropes with his broken arms behind him, two years in solitary confinement in a cell infested with roaches and rats, frequent beatings, and tortured with cables.

Someone had to help him comb his hair.

Upon reading those words in the New York Times today, my heart was heavy.

Not only because we lost a true American hero, who loved his country, but also because we are left with a germaphobic, self-absorbed, self-concerned tyrant, who copped five draft deferments and has yet to visit the thousands of American soldiers on the front lines in Afghanistan or Iraq.

Trump is not invited to McCain’s funeral, and I’m happy about that. Not that he would have attended, because he’s a coward.

I regret not having mailed the letter I wrote to Mr. McCain following Trump’s searing put- down of him and amidst the booing of McCain at Trump rallies.

In part here is what it said:

I am so sorry that Donald Trump made a joke about your time in captivity because if not for your sacrifice, I might not be free.

And thank you for answering the call to defend our country’s freedom, and for putting America before yourself and for your undying patriotism.

Finally, thank you for defending the Constitution, which allows me to be able to write this letter to you at all.

And most importantly, I needed to tell you that despite Trump and his booing followers, most Americans are filled with fiery patriotism and consider you a true American hero.

Here are some of my favorite quotes by the late great John McCain:

“I will not take the low road to the highest office in this land. I want the presidency in the best way, not the worst way.”

“I don’t mind a good fight. For reasons known only to God, I’ve had quite a few tough ones in my life. But I learned an important lesson along the way: In the end, it matters less that you can fight. What you fight for is the real test.”

“I fell in love with my country when I was a prisoner in someone else’s. I loved it for its decency, for its faith in the wisdom, justice, and goodness of its people. I loved it because it was not just a place but an idea, a cause worth fighting for. I was never the same again; I wasn’t my own man anymore; I was my country’s.”