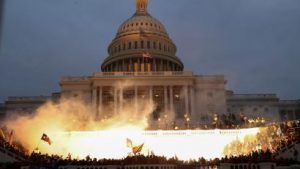 The world has seen QAnon before. It was called Nazism.

For years, QAnon believers have assured each other that the Democratic cabal of pedophilic, satanic world leaders would be exposed and defeated by Donald Trump in a cataclysmic event called “The Storm.”

The Q cultists promise that when “The Storm” comes, the Democratic cabal will be rounded up and executed.

Last July, the Texas Republican party proudly touted their new slogan: “We Are the Storm.”

Many QAnon theories and violence chillingly mirror the Nazi propaganda and terrorizing activity.

The Brownshirts, the Nazi party military wing, aka Sturmabteilung, or SA, was cofounded on October 5, 1921, by Adolf Hitler and Ernst Rohm.

Sturmabteilung, translated means, Storm Detachment, and the military wing played a significant role in Hitler’s rise to power in the 1920s and 1930s.

The identification as a Brownshirt came from the color of their uniform shirts. According to the Nuremberg Military Tribunal, the SA was “a group composed in large part of ruffians and bullies.”

They threatened and terrorized opposing party members and violently intimidated journalists who opposed Hitler, Romani, and trade unionists. The Brownshirts were particularly cruel to the Jews and rabidly carried out unbridled and unchecked street violence against them.

Many SA members believed that their mission was not only a patriotic duty but, more importantly, a struggle to take away power and cleanse Germany from the Communists and the Jews.

Heinrich Himmler’s SS originated as a branch of the SA but eventually superseded them.

The Night of the Long Knives was the purge of Nazi leaders by Hitler on June 30, 1934. Hitler feared that the SA had become too powerful. To consolidate his power, Hitler ordered his elite SS guards to murder the organization’s leaders, including Ernst Rohm and hundreds of other perceived opponents.

The SS overshadowed the Brownshirts from then on, but the SA remained intricately involved in all aspects of the Nazi agenda, including the Holocaust.

For hundreds of thousands of Germans, the SA was their first introduction to Nazism. Many SA supporters approved of the political violence and intimidation and saw their mission as a patriotic duty to save Germany.

Many SA supporters believed that a secret cabal was taking over the world and that they controlled high positions in government, banks, international finance, the news media, and the church. The SA and their supporters were convinced that the cabal wanted to disarm the police, promote homosexuality and pedophilia, and mongrelize the white race so that it would become the minority and forever lose its power.

The history of the SA, pro-Hitler, and SS mobs highlight the terrifying similarities between them and the political violence we all witnessed on January 6 by the MAGA, pro-Trump, and QAnon mob:

Intimidating, racist, violent citizens incited by their leader, swept up in the frenzy of a power-grabbing hate-filled political mission to capture and execute their political opponents in a stormy purge.