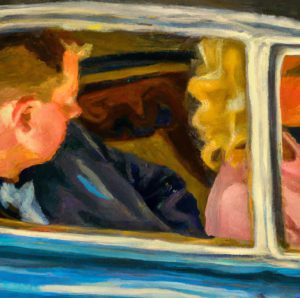 ALMOST IN THE NICK OF TIME

Let me tell you about Nick.

He’s tall, handsome, and the best thing that has happened to Mom in a long time, maybe even ever. And even though Mom says Nick has his selfish reasons, he likes me!

Last week, when Nick came to pick up Mom to take her to Seaside Park, I screamed out the back window for her to take me with them, which I could see made her furious.

Mem yanked me away from the window and made me sit facing the wall in the living room for fifteen minutes. I thought they had left, but then Mom came upstairs and said Nick felt awful that I was begging out the window and insisted I go with them.

When I yelled to Mem that I needed to come off the wall because Nick was waiting for me to go to the beach, mean Mom told me Nick could care less about me. “He only told me to let you come with us because you screamed out the window like a nincompoop. You’re a pathetic beggar, and he feels sorry for you.”

Mem asked Mom why she had to say such hurtful things to me, but I didn’t care because I was just happy to be going to the beach.

I thanked Nick later, and he told me it was no big deal since he’s Mom’s boyfriend now and wants us to be friends. Nick should only know the truth—that Mom has another boyfriend.

Mom is also dating a guy named Roberto. I’ve never met him, but I’ve seen him from Mem’s window a few times. I’m forbidden to look out the window when Roberto shows up, so I am as careful as all get out.

Mom told me if she ever catches me spying on them, she’ll give me the strap, which is way worse than the wall.

I know Roberto doesn’t know I exist because, according to what Mom tells Mem and Mere Germaine, she’s afraid to tell him she has a kid.

I was going to let Nick know that he isn’t Mom’s only boyfriend, but he was so nice to me, I didn’t want to hurt his feelings, and at least Mom told him about me. And unless Nick is good at hiding his true feelings, it seems like he’s okay that I exist.

Mom was reading a book on the blanket while the two of us dug for clams. We talked about White Street and what it was like living there. I told him about the rat traps, but he already knew. He asked me if I was afraid like Mom, and I lied and said no.

He seems to care about what I think, and I like him a lot. He calls me Kiddo, and I like that too.

When we got home that night, Mom stayed in the car with Nick while I went upstairs. I tried to look out the window to see if they were making out, but Mem pulled me away and yelled for me to give them some privacy or she’d put me on the wall again.

I pretended to go to bed and took one more peek out the window. Mom wasn’t kissing Nick, and it was obvious that he was upset about something because he had his head in his hands, and she was patting him on the back, which I took as a bad, bad sign.

4 thoughts on “My Stolen Diaries – Chapter 14: Almost in the Nick of Time”