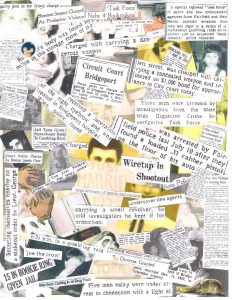 IS MY DAD IN THE MAFIA?

Like any kid, I wish I knew more about my father and would like to see him again, but I know it’s not possible, especially now that Mom thinks he’s in the mafia.

Mom refuses to talk about him, so we never do. I can sometimes get Mem to talk about him, but not very often. She mostly tells me, “Go ask your mother.” When I do as Mem says, Mom gets ugly in the face and tells me to “Shut my trap.”

I know I’m French on Mom and Mem’s side, but I don’t know what I am on my father’s side. Before my Catholic baptism, I was Greek Orthodox, so maybe I’m Greek?

But when I ask Mem and Mom if I’m Greek, they both respond with, “Don’t start that up again.”

But I can’t help myself. I try not to start up or cause trouble, but every time I look in the mirror, I’m reminded over and over of all the things I don’t know about myself or my dad.

I tried to ask Adam some more mafia questions, but he must have told Mem I was snooping around because he said he wasn’t allowed to talk about that with me anymore. When I asked him what could be worse than getting killed, he made believe he didn’t hear my question and changed the subject.

That made me boiling mad at Adam, so I told him that Steve was buying us a television set for Christmas, which I could see bothered him a lot.

Three days later, Adam had a television set delivered to our apartment, which made Steve furious, but he never said a word about how he felt to Mem. Steve asked me if I had anything to do with Adam buying us a television set, and I lied and said no.

I also lied and told Steve that Adam told me plenty about my dad and asked him what he knew. He said he knew nothing about my dad, but I could tell he was a liar, just like me. Plus, when I asked Steve if he thought I looked like my dad, he said “a little,” so he must know something about him.

Even though I tried, I couldn’t get Steve to say anything more except that kids are better seen than heard and that I should give up getting any family secrets from him.

So, I listened to Steve and gave up until the other night when I caught Mem and Mom whispering together about a newspaper article Mom had in her shaking hand.

They spoke French, but my understanding of the language is getting better by the day.

Whatever they were talking about, as far as I could figure, had something to do with my father running naked out of a swamp with his hands up over his head! His friend Anthony, who It sounded like Mom knew, was shot and killed, but the police couldn’t kill my dad because he wasn’t wearing any clothes and his hands were in the air.

Mom also told Mem that the article said my dad’s problems with the law had something to do with a bunch of arrests against some of the hitmen connected to the Gambino family.

Mem hugged Mom, who kept saying she was afraid someone in the mafia would try to hurt me to get back at my dad.

Why would anyone want to hurt me? And who was the Gambino family?

Then she hid the newspaper article on the top shelf of the kitchen cabinet over the sink.

In the middle of the night, while everyone was asleep, I snuck out of bed and tiptoed to the kitchen even though I was scared to death of the cockroaches and rats. But I had to read the newspaper for myself, so I took my chances.

I didn’t turn on the light, so the cockroaches on the wall didn’t move much.

I dragged a kitchen chair to the sink, climbed up to the cabinet, and discovered a pile of newspapers, so I pulled them all down.

The article on the top said: BRIDGEPORT MAN ARRESTED IN SHOOTOUT

And there in the newspaper was my dad’s name and address. It said that investigators from the State Organized Crime Task Force arrested Mick Michaels for assaulting a State Trooper. The guy Anthony, who was with my dad, got shot in the head. The police said Anthony, who had ties to Billy Batts and the Gambino Family, committed suicide. My dad was charged with assault and carrying a dangerous weapon, which I’m sure had to be a gun. They also charged him with violating probation, whatever that is. And he paid $25,000 to stay out of jail until his court date.

My heart was pounding as I read through the newspaper articles and wrote down as many headings as possible so I could read them later.

I went back to bed but couldn’t sleep. All I could think about was that my dad was a thief, a thug, a criminal, a dangerous man, and probably in the mafia.

The next day I asked Sister Regina Mary if $25,000 was a lot of money, and she told me it was almost one-quarter of a million dollars! I also asked her if she knew anything about the Gambino family, and she said they were mafia murderers.

Now I know that Mom is right, and my dad is in the mafia, but at least he’s not in jail. Not yet, anyway. And I pray he’s not a hitman.

So now, like Mom, I’m worried that the mafia might be coming for me, which makes me really angry at my dad. Doesn’t he know I could get killed or worse? Doesn’t he know I’m already living a scary life?

And since he came up with so much money, my dad must be rich, so why are we so poor?

Click here for Chapter 14: Almost in the Nick of Time