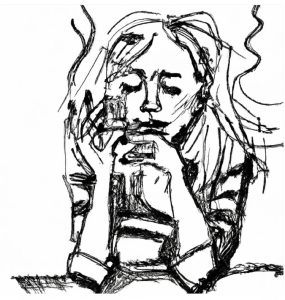 Since Roberto doesn’t know I exist, I almost never look out the window when he picks up Mom because I don’t want to ruin her chances with him, even though I wish she would choose Nick.

I’m not sure Roberto even likes her. Mom is always coming into the apartment after their dates crying, and Mem always tries to calm her down.

If Mem is asleep when Mom comes home from her stupid dates with Roberto, she sits at the kitchen table in the dark for hours, smoking cigarettes. Mom never comes home crying or upset when she goes out with Nick.

Mem keeps saying that just because Roberto is rich and comes from some fancy town called Westport doesn’t mean he can treat Mom like she’s lower than him. Mere Germaine keeps telling Mom that with her beauty, she can get any man she wants.

“You look out that window when Roberto drops me off, and I’ll kill you,” Mom always says, so I’ve been careful about when and how I look.

Since Roberto always makes Mom cry, I wish I could get up the courage to stick my head out the window and show him once and for all that Mom has a kid, but I don’t dare. Not yet, anyway.

And I still can’t figure out why Mom doesn’t love Nick. Why does she waste her time with Roberto when Nick adores her? Plus, Nick knows I exist, and he’s okay with it. More than okay with it. He told me he loves me!

I sort of understand why Mem and Mom needed to lie to St. Ambrose about me being Mem’s daughter, but at least at school and church, Tony is a human being who belongs to somebody.

Roberto thinks it’s Mem, Mom, and Mere Germaine. That’s it. No Tony at all because he has no idea that Tony exists. Why can’t Mom tell him about me? Why would a mother lie about being a mother to the man she loves and who supposedly loves her?

Mem told Mere Germaine that Mom hiding me from Roberto was proof that he wants Mom to be someone she isn’t and that she would be better off being with someone who loves her for all of her. Mere Germaine agreed.

I’m also hoping Mom gets rid of him, but only if she chooses Nick because I’d hate to see Mom sad, and I don’t want her to be alone, even though she might ruin my life.