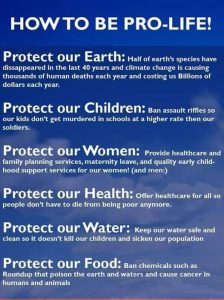 As a child of a child, I get the impact and consequences of pro-choice vs. pro-life. My mother didn’t have a choice.

If abortion had been legal in the early 1950s when my mom found out she was pregnant with me, I don’t know what her choice would have been.

But I still believe in a woman’s right to choose what happens to her life—to her future.

A female friend from college recently posted bullet points on her Facebook page about the upside of the Supreme Court’s decision to overturn Roe v. Wade. The image hyped how justice had been served and how the sanctity of the unborn had finally been vindicated. Her post suggested that every unborn life was cherished and chosen.

Every unborn life? Chosen by whom?

58% of U.S. women of productive age live in states hostile to their right to choose their future. That’s over 40 million women whose right to choose what happens to their lives has been taken away because they live in the wrong state.

I knew I was walking into quicksand when I responded to my friend’s post by asking, “What about rape and incest? How exactly is that cherished and chosen? What about the sanctity of the born?”

I also revealed something on my friend’s page that I had never before written in the hopes that she would feel my pain.

And then the claws of one of her friends, who I’ll call Bleep, came out like daggers.

Bleep’s words directed at me and my Facebook page were vile, crass, and, frankly, the lowest of low class.

Bleep ended her rant by questioning my intelligence. The quicksand covered me from head to toe, but I wasn’t going to let Bleep drown me in it.

I rarely use the phrase low class, because I spent a good part of my younger life poor and in a lower social class.

As a kid growing up in a tenement, I didn’t know anything about class and status, but I knew we were poor. My grandma, who raised me, taught me to be kind, when possible, but when not possible, to defend myself quickly and fiercely in whatever way or form I deemed appropriate.

I checked out Bleep’s Facebook page, and to say I wasn’t impressed, would be kind.

My grandmother was illiterate but wiser than most. I might have been raised poor, but my grandma raised me right and taught me that money can’t buy class. You either have it within you or not, and Bleep was the perfect example of the have-nots, regardless of her social standing.

My “friend” did not defend me, nor did she take Bleep’s hateful post down. So, after fuming and a few tears, I let Bleep have it—but good. My grandma would have been proud.

Then I deleted all my posts on my “friend’s” page and sent her an IM, letting her know I was unfriending her and why.

Oh, and one more thing before I sign off:

To the men who want to control the women in their lives, I say, “If you’re against abortion, stop renewing your Viagra prescription, use a condom, or get a vasectomy.”