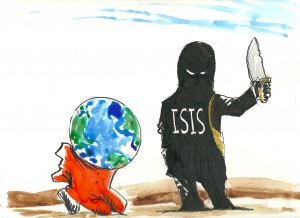 I need to find a better way to wake myself up in the morning because there is zero enjoyment to be had as my eyes glaze over the front page of my revered paper lately.

ISIS is badder than ever, Brussels is shut down, France is brutally enforcing their emergency edict, there is mass hysteria in the U.S. over the relocating of Syrian refugees to the various American suburbs, and Governor Chris Christie cries while remembering the family friends he lost on September 11, 2001.

Who needs this crap first thing in the morning?

It didn’t surprise me that yesterday the State Department issued a rare worldwide travel alert for American citizens during the 2015 holiday season—and through February 24, 2016.  We didn’t need the SD to tell us we are in dangerous times.

What surprised me was their following one-liner explanation for why the alert: “Members of the Islamic State are returning from Iraq and Syria.”

Is the State Department trying to give us a clue that they’re on their way HERE?  I mean really, can they be a little more specific?

Not that I wanted to read on, but I was hoping for a little clarity.

Here was their follow-up: “Islamic State, Al Qaeda and other extremist groups continue to plan terrorist attacks in multiple regions.”

REGIONS LIKE WHERE? Please State Department, give me a hint.

“U.S. citizens should exercise vigilance when in public places or using transportation,” the alert said. “Be aware of immediate surroundings and avoid large crowds or crowded places. Exercise particular caution during the holiday season and at holiday festivals or events.”

Well, call me stupid, but this pretty much confines me to my house.

I really wanted to rip up the paper right there, or stab my eyes out with a hot poker, but I couldn’t stop myself from reading on.

As I tried to keep the coffee down, I came upon another tidbit:

According to the United States military, this past Saturday they destroyed 283 Islamic State tanker trucks transporting oil out of eastern Syria.

Here’s the kicker: The strikes near Deir el-Zour and Hasaka Syria are part of a NEW campaign to cripple the ISIS oil revenue.

Our U.S. military hasn’t been worried about ISIS oil revenue before this?

Okay, I decided enough reading was enough when I skimmed through a few other joyless missives like:

“Iraq and Syria as we know them are gone.”

Call me naïve, but I didn’t think things could get any worse.

While the U.S. says Iraq and Syria are goners, the Russian-Iranian axis vision, along with their proxies, Hezbollah, Bashar al-Assad, and Tehran-backed Baghdad seeks to restore Iraqi and Syrian borders and governments.

Good luck with that.   And what a dream team, huh?

Oh, and Putin seeks to dominate the Syrian government with or without Assad. Putin is not interested in targeting ISIS but aims to establish a solid strategic base for Russia in the Middle East.

Should this surprise anyone? I mean come on, the man has a super inferiority and Napoleon complex.

By this time, I needed more than a cup of Joe. I needed a valium. But I couldn’t stop reading.

Iran is ensuring FULL protection for Hezbollah in Lebanon and Syria.

And last but certainly not least, this final bit of news caused me to throw my much-needed coffee down the kitchen sink and shove the paper deep into the garbage can:

“American ground combat forces will have to be deployed to provide cohesion and leadership.”

U.S. boots on the ground. Joy to the world.