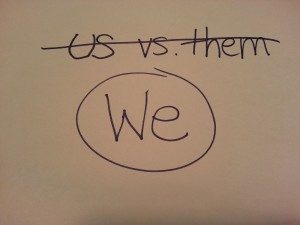 Every time one of my Facebook “friends” try to politically cut me down or make a snarky comment on MY FACEBOOK PAGE, I can’t help but think about my in-laws.

“Trust no one except your own.”

I heard this sentiment from my Holocaust surviving mother-in-law in her thick German accent hundreds, no; thousands of times.

She’s gone from us.  Almost all of the witnesses to that unspeakable annihilation are gone.

I often wonder what she would say about the current state of politics.

I doubt that she would be surprised at all.

“Our neighbors turned us in. People we thought were our friends.”

He knew the “officials” he dealt with, my father-in-law would tell me. They’d attended the same schools, and knew each other’s parents, brothers, sisters.

“None of that mattered,” he would mutter. “I was their enemy,” he would state so matter of factly.

Am I the enemy?

Would my neighbors and friends turn me in if someone high-up in government asked them to?

I know in my ordered mind, that will never happen to me.

But then again, my in-laws thought the same thing.

Some posts are a bridge too far, so those authors got the unfriending ax.

Other posts, I simply hide.

But is that enough?

If he had been born to Fritzi and Fred just a few years earlier, in Vienna, he would surely be dead.