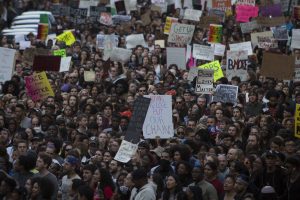 Many have said that Governor Larry Hogan of Maryland declared a state of emergency too late in the game.

Call me stupid, but it seems that the residents in West Baltimore have lived their whole lives in a state of emergency.

Baltimore’s infant mortality is on par with Moldova and Belize.

Here is what I have to say to all you presidential wannabes out there:

Quit blathering about the budget deficit and the national debt, and let’s have a frank and meaningful discussion about the problems that are really plaguing our country, like:

Racialized mass incarceration and the need for criminal justice reform

The lack of community programs and recreational centers in minority neighborhoods

Stop pretending that the best way to reduce poverty is by lavishing tax breaks on millionaires and billionaires.

Lift the cap on payroll taxes so the rich pay the same share of their income as everyone else.

Stop defending capital gains loopholes, offshore accounts and all the other scams that rig the game for the wealthy.

Stop rejecting Medicaid, the literal lifeline for poor Americans who have no other health coverage.

Stop trying to repeal the Affordable Care Act, whose actual repeal would cruelly end coverage for tens of millions of Americans.

Stop undermining Medicare and Social Security, the two most successful anti-poverty programs in our nation’s history.

1 thought on “Baltimore Is Burning—Do You Really Not Know Why?”