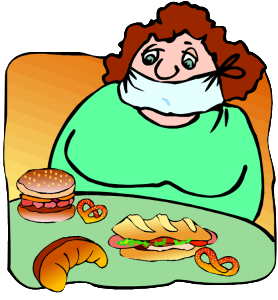 As someone who was the skinny girl growing up, I could eat pretty much anything I wanted. My friends and family watched with jealousy, as I scarfed down French fries, banana splits, pizza, Twinkies, and the fatty like. It wasn’t until I quit smoking (because I was pregnant), did my fat intake catch up with me.

I gained over 100 pounds during that pregnancy—and I have to admit, I savored every last fat gram.  Hovering around 225 pounds, I was hoping to deliver a 50-pound baby. Nowhere near 50, but at almost 9 pounds, my first born came via C-section. As if having my stomach muscles cut in half wasn’t enough, I was obese, depressed, in excruciating pain, and insatiably hungry. I left the hospital a little over 205 pounds, and I was freaked.

Since food and weight gain had never been an issue for me, I was in the dark as to next steps. Plus, I couldn’t do anything physically strenuous for 6-8 weeks post C-section.  On top of that, I was on maternity leave from Newsweek magazine and was required to return to work 4 weeks after giving birth. To put it mildly, I was one huge blob of misery.

I absolutely 100% wanted to get back to work as thin as possible. Yeah right. In my mind, even if I lost 20 pounds by the time I reported for duty, it was like removing a quart of water from the Long Island Sound. I waited as long as I could (a week before work D-day) to go through my closet.  Sure, I had lost a few pounds, but nothing I tried on came close to fitting my new overly svelte self. Even my shoes were too small.

So I ran over to my go-to boutique, where I was a regular customer and gave the saleswoman a cheery hello. She looked at me with disdain and I quickly realized that she didn’t recognize me. I decided to keep my identity to myself when she snottily informed me that I looked to be a size 16 and the largest size she carried was a 14. Ouch. I was humiliated and browsed around unassisted, hurt and ashamed. I managed to tearfully squeeeeeeze myself into a size 14 while vowing to lose the weight if it killed me. I bought several suits, and a few pair of shoes and skulked out of there as quickly as I could.

The day after my humiliating shopping excursion I called my obstetrician’s office and frantically asked if he was in. His receptionist/office bully blandly asked me what my problem was.  “I’m fat,” I whimpered pathetically and tried every which way to get the doctor on the phone. “I’ll make sure he gets your message,” she uncaringly responded and bid me a curt goodbye.

My next call was to a diet doctor who answered his own phone and set me up with an appointment—that day. When I arrived, he weighed me, measured my waist circumference, and snapped some photos. Then he sat me down and gave me the dispiriting low down.  According to Dr. Diet my fat cells needed to be retrained. And he strongly suggested that I consume no more than 20% of total fat based on a daily intake of 1,200 calories. The 20% he recommended, equated to a measly 24 grams of total fat daily. He also suggested that I analyze the Nutrition Facts labels to find foods highest in vitamins and minerals and lowest in carbs, saturated fats, and sugars.

Thus began my intense fear of fat.  I was like a nutritional label maniac. I read with due diligence every single food label I could get my hands on and calculated every calorie, carb, sodium, fat and sugar gram I put into my mouth.  And I began working out. Thirteen months later, I had lost nearly 100 pounds!

I make it sound easy, and I’m giving you the bare minimum cliff notes. Those thirteen months were the longest of my life. But all the hard work paid off.

Here are some important lessons I learned along the weight loss way.

First off, a measly 1,200 calories a day left me feeling hungry—but I still had enough energy for some mandatory exercise. And at 1,200 calories I was able to shed a good amount of weight every week, especially if I added in the dreaded daily workouts. I also eventually realized that good fat was necessary for energy, vitamin absorption and healthy brain development. And drinking water filled me up, so I drank lots and lots of it. And I tried to burn more calories than I consumed. I repeat, I tried.

I forced myself to stick to the old adage: Eat Real food. Not too much. Mostly plants.

And I stayed far away from stuff like monosodium glutamate, high fructose corn syrup or Yellow No. 5. These ingredients are found in most processed foods on grocery store shelves, from chips to ketchup. And they have been linked to everything from cancer, obesity and diabetes to brain and liver damage. If there is anything on the nutritional label you can’t pronounce, don’t buy it.

Potassium sorbate is used as a preservative in many foods. It’s also used to kill bugs. And sucralose is often used as a sweetener, but it contains chlorine. Do yourself a favor and go for the gusto with plain old sugar.

Oh and avoid anything white, like bread, pasta, rice, sugar and flour. White means it’s bleached so unless you like to eat bleach, stick with whole grains.

Saturated or trans-fat molecules have a natural tendency to bond with each other on contact, resulting in the formation of artery-clogging plaque.

Unsaturated fat contains larger molecules that tend to slide past each other in the bloodstream, resulting in little to no plaque build-up.

Stick with pork, lamb or beef cuts with “round” or “loin” in the name and choose meat between 90-95% lean. If it’s within your budget, choose lean cuts that are free-range, organic or grass-fed, since most commercial cuts contain antibiotics and hormones. Grill, bake, steam, poach, or broil lean meats to keep their fat content low.

As obsessed as I was with fat-free, it came as no surprise to my palate that it was mostly taste-free. To make up for no taste, food makers tend to use ingredients like sugar, salt, and chemicals, so don’t be fooled by the whole fat-free scam.

The most shocking thing I learned through the weight loss process is that people don’t give overweight folks the respect they deserve. When I was overweight, I was painfully invisible. And so many people made shallow assumptions about me without even bothering to look beyond my physical appearance.

I learned that I couldn’t control how other people treated me, but I could control how I treated myself. I made sure to make “me” time, and made my health a priority. And I took one day at a time. And if I messed up? I took a deep breath and began again.