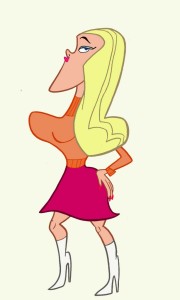 I recently blogged about the Y Chromosome, and I might be breaking girl code here, but I feel compelled to illuminate the broad assumptions about us X’s to all you Y’s out there.

Call it a Father’s Day gift.

It’s all about the X chromosome, and the sooner you figure that out, the better for you.

According to the Los Angeles Times, women have more genetic instructions since they are the product of two X chromosomes. Thus, we have more depth and complexity than men. Okay, the LA Times was talking about gene complexity, but I am about to prove to you that yes, women are way more complex and way deeper than the mighty machismo.

Women want 20 to 30 minutes of foreplay; men give us maybe 20-30 seconds.  How do you think the phrase wham bam thank you ma’am got its start?

A woman spends an average of two years of her life looking at herself in the mirror. A man spends six months. Men check out their reflection as often as women do, but women take longer looks, due to the necessary maintenance a woman has to do in front of a mirror. Hello.

If you guys want a happier relationship with your women, you need to let them be the boss of the house. Listen up guys, and just say yes.

When we’re running late and tell you we’ll be ready in five, this really means at least 20 minutes. You can while away the time, and do something constructive. Like taking out the garbage that has been stinking up the house for way too many days. You might even have time to wash and wax the car.

If she asks, “Is there some importance to today?” you messed up big time, stooge head.

And don’t believe her when she says “You’re the boss.” You are NOT the boss. You’re just a pompous womp.

And when she complains that you never talk to her, don’t fill the silence for the sake of it. It’s too damn late. Crickets are better at this juncture.

When your woman tells you that “I’ve only had sex with (insert an infinitesimal number here) men.” She’s a liar, liar, underpants on fire. But NEVAH let on that you don’t believe.

Telling us to “Relax,” is suicide. So is, “Why are you so emotional?”

And don’t ask too many questions; unless she calls you out for not asking enough questions.

When you’re trying to sneak in a nap and it sounds like a herd of elephants just ran across your bedroom, get your ass up and do something worthwhile.

Never blame her behavior on her hormones. EVER.

Ask her multiple times if she’s okay. That’s good and shows you care.  But don’t tell her to smile. That’s not good. That’s just BAD.

When she says she’s “okay,” or she’s “fine,” she is NOT fine, and she is NOT okay. We shouldn’t have to tell you that.

When she says, she barely drank; she’s drunk.

When you catch her flirting, and she tells you that “he’s just a friend,” big trouble is brewing.

When she proclaims that she didn’t expect you to understand; she definitely expected, but you ditin.

When she promises that she won’t get mad if you just tell her the truth; do not, I repeat, DO NOT fall for this.

And if she tells you that she is not the jealous type. JEALOUS!!!!!

“I’m not in the talking mood,” means talking to a brick wall would be more constructive.

When she say’s “go ahead,” this is NOT giving you permission, so don’t do it.

When she says “Forget it, I’ve got it covered,” you are definitely in the dog house.

And when she says the dreaded “we need to talk,” this is B.A.D.

When she asks, “You’re not wearing that, are you?”  You need to change.

When she asks you, “Which part of no didn’t you understand?” Give whatever you wanted to do up. ASAP.

And when she wants to know if you have to do that right now? Don’t answer. Just stop.

And last but not least, when she says “I’m done,” run out quickly and buy a very expensive piece of jewelry. Remember, diamonds are forever.