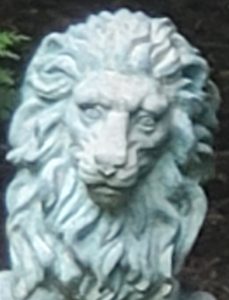 I was recently asked: What is the best word to describe yourself?

The first word that instantly hit my brain was lionhearted, although I don’t know why it did because I had never thought of myself like that before.

On December 31, 2021, I came upon an article attorney and columnist Ms. Flowers wrote for theeagle.com: Get Rid of Christine Blasey Ford Time.

Since she provided her email in the column, I thought about responding directly to her, but I changed my mind and decided to write a blog post instead. I’ll probably forward this post to Ms. Flowers, although I doubt she’ll be able to relate to it or feel the debilitating anguish her words caused me.

I worked on this post for almost five months, mostly because I struggled with how to structure it so that it would make the most sense. My post might seem to the reader to meander and jump around because it does. But then again, so do my everyday thoughts.

It all started in 1967. Or at least that’s as far back as my brain has allowed me to remember.

Back in 1967, when my fourteen-year-old world was crashing in on me, Ms. Flowers was around five.

Lionhearted is often associated with warriors who exhibit courage, determination, and bravery in war. Back in the late 60s, I was fighting my own kind of war. Since lions are the least afraid of anything of all the predators, I often wish I had been more lionlike, even though I was the prey.

My nightmares are often about lions stalking me, and in my dream state, I’m always scared sh**less, yet in my awake state, they’re my spirit animal — after unicorns.

I have yet to remember a night terror where the lion has ever caught me, though. Maybe it’s because I wake up before he has had a chance, or maybe my dream perception is off, and he’s protecting, not hunting me. Or maybe he backs off because he senses my strength — and he doubts if he can take me on.

In the 1980s, I named my daughter Ariel, meaning Lion of God in Hebrew. My daughter was born before The Little Mermaid movie came out, so the name was fairly unknown. When I named her, I only knew of one other Ariel — Shakespeare’s male spirit in his play The Tempest.

In the late 1990s, as I left my SoHo office on my way home one night, there was a man selling angel statues on Broadway. Smack in the middle of the table was a lion. One lone lion surrounded by angels. I took it as a sign and bought him. He was too big for a bag, so I nestled him in my arms.

I lugged him home via the E World Trade Center Subway, followed by the Long Island Railroad, and then placed him in the corner of my backyard.

And I know this sounds insane, but he needs to be in just the proper position because, for whatever reason, he’s my back-of-the-house focal point. When the gardener moves him, I place him right back to his corner spot. 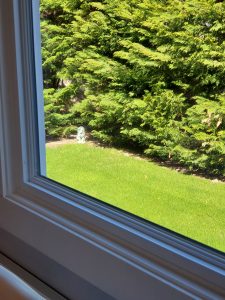 Now, let’s talk about my front-of-the-house focal point — the parking spot directly in front of my house.

A certain couple on my block thinks I’m a mean old crazy lady because I have asked them nicely — five times — to please refrain from parking in that spot.

I’m not mean or crazy. There’s plenty of parking on my street and more than ample parking spaces in front of their own house, so there’s zero need for my neighbors to regularly and purposefully park directly in front of mine.

The fifth time I spoke to my neighbor, I had no choice but to tell him that I had been assaulted as a young person and shared my fear that a man might be lurking behind his parked car. I was emphatic that the space had to be empty because I needed a clear view of the street directly in front of my house; otherwise, I couldn’t go outside to empty the garbage or for any other reason.

From the look on his face, I know he was thinking “cray-cray,” but he never parked in front of my house again, which I wholeheartedly appreciate because I no longer need to worry about a car-lurking man.

Front to back, back to front, while always plotting my escape. It’s exhausting, and I wouldn’t wish my modus operandi on anyone.

The reason my lion is so ideally situated is that I not only see him through my back window but his image is perfectly reflected on my glass back door. So, I can see him without actually seeing him. 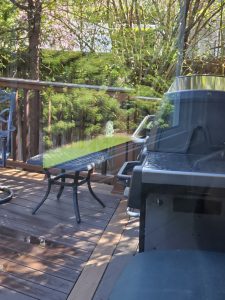 Okay, now back to the Flowers article.

In her piece, Ms. Flowers wrote this about Dr. Blasey Ford: “…if you live in the United States, where we have a female vice president, a female speaker of the House, thousands of female judges at the state and federal level, it’s a little harder to understand why a woman who says she’s been attacked would wait years or even decades before making her accusations.”

First off, fifty-five years ago, there was no female VP, no female SOH, and few female judges, so why is it so hard for Ms. Flowers to imagine that a woman or child back then might be afraid to accuse?

It took me decades to accuse as well. But now don’t ask, because I’ll tell.

Hell, I’ll tell even if you don’t ask because I can’t control myself. The ripple effect of trauma is a curious phenomenon.

I suppose I kept my mouth shut and my words in for so long that they just flow out of me now. I’m a human coping machine, and time does not heal all wounds.

CBFT. How clever. How maddening. How painful.

Flowers’ hurtful and thoughtless words made me ask myself: Does she have daughters?

In 2020 I was diagnosed with PTSD. The diagnosis was a relief, but there’s no cure for what ails me. My trauma is like a shadow that follows me wherever I go. Me and that miserable shadow.

In September 2018, both Dr. Blasey Ford and Brett Kavanaugh testified before the U.S. Senate committee.

First up, Ms. Ford testified about being sexually assaulted by Kavanaugh as his friend watched, their uproarious laughter encoded into her brain, his hand over her mouth, his forceful and frightening groping, her panic that she might suffocate, her two front doors, the science of traumatic memory.

Her testimony was riveting, and I never doubted one word of it because, like so many of us, I have lived her pain.

Next up, Brett Kavanaugh testified about liking beer. I never doubted his intense love of beer because Kavanaugh mentioned his fondness for it over 30 times. His entire testimony centered around his love of beer, and in his own words, he fully embraced it. Personally, I would never think to define the word embrace with a brewski, but Brett Kavanaugh did. His testimony was cringeworthy. And please — stop with the gaslighting — the man sexually assaulted Dr. Blasey Ford.

How do I know?

I learned the hard way that a boy or a man who loves his liquor is in danger of drinking too much of it, eventually resulting in bad choices. I know because I was an innocent victim of the life-altering consequences of someone’s drunken behavior — my younger self destroyed by a man who loved and embraced his booze.

In her column Ms. Flowers went on to say: “…even forgettable cads have a right not to have their reputations trashed by women who emerge from the shadows like avenging handmaids, wanting to tell their stories of woe to strangers.”

Woeful stories? A story is an account of events told for entertainment. Unless you’re a weirdo, there’s zero entertainment in the sexual assault of a child. And back then, I did tell someone: my OGBFF.

And yes, it was horrifyingly woeful. More woe than any 14-year-old should ever have to feel or bear. My woe, Ms. Flowers, is never-ending.

Christine Flowers ended her column with: “Men who rape and sexually assault women need to be held accountable. The way to do that is to actually hold them accountable when they commit the acts, not years later when they won’t be prosecuted.”

I have two replies for you, Ms. Flowers: Firstly, you are incredibly naïve, and I know beyond a reasonable doubt that you were never sexually assaulted as a child. And secondly, I would have done everything and anything to save myself from that drunken monster, but back in 1967, children like me were rarely seen and never heard.

And to the people out there who question my sanity?