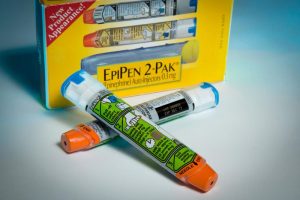 My allergies started out gradually and crept up on me.

First, there was a metal taste in my mouth like I was chewing aluminum foil whenever I drank red wine, ate a handful of assorted nuts, a few cherries, or a side of mixed vegetables.

Then, in addition to “metal mouth,” it seemed like certain fruits I ingested, like apples, peaches, plums, and even raisins, would tingle my tongue or itch my throat. I had no idea what was going on.

Plus at night, I would writhe around for hours with abdominal pain, severe nausea and such intense stomach palpitations that I thought there was a jackhammer digging a crevice inside of me.

I went through untold numbers of laboratory, radiological, ultrasound, and endoscopic testing.  I suffered through a colonoscopy, a cystoscopy, and a CT scan.

After months of tests, my gastroenterologist sat down with me to tactfully explain my problem: It was psychological. He suggested I try a psychologist.

Really? All those raucous parties in my belly were caused by crazy?

Turns out he was almost deadly wrong.

I eventually discovered the reason for my “problem” the hard way—by snacking on a bunch of raw baby carrots, which caused an allergic reaction that almost killed me.

I had somehow developed a “priority allergy” and was little by little becoming deathly allergic to carrots. I had also developed a severe case of fruit-pollen syndrome.

I was later told by an allergist that in addition to having the fruit-pollen syndrome, my priority allergy to carrots, triggered a systemic reaction in my body that induced a near fatal outcome when my severe tongue swelling frightfully cut off my ability to breathe.

The way it was explained to me, is that my allergy to certain tree, grass, and weed pollens is why even a sliver of a carrot has become my mortal enemy.

The pollen molecules of weeds and certain trees like birch, alder, poplar, are so similar in structure to the proteins in certain raw vegetables and fruits that one of the body’s natural defenses against allergens—an antibody called immunoglobulin E—can’t tell the difference.

So when the antibody binds to a fruit or vegetable protein, anyone allergic to the pollens I described above, may develop an immune response that can cause metal mouth, itching, and tongue tingling.

The reaction can actually bypass the mouth and enter the gastrointestinal tract, causing severe abdominal pain, stomach palpitations, and nausea.

And my gastroenterologist didn’t know this because?

Now that I am allergic to birch pollen, I have also developed an oral allergy to apples, pears, peaches, plums, apricots, cherries, hazelnuts, cashews, almonds, and kiwis. And it seems that every day I discover another annoying food I’m allergic to.

I recently ate a slice of rye bread and spent the next few hours itching and coughing, while clutching my at-the-ready EpiPen.  And then there was the lip swelling and tingling I experienced after drinking a Corona beer. Go figure.

I am also severely allergic to mold, which triggers my asthma, as well as dust mites, and pet dander. All three cause me to cough, wheeze, become dizzy and lightheaded, and run for my Epi.

But the worst allergy for me is called weed mugwort and has caused mild to near fatal allergic reactions in my system to carrots, bell pepper, caraway (thus the rye bread), coriander, aniseed, fennel, cinnamon, paprika, chamomile, green tea, and cumin.

There are a few foods I can still enjoy without my stomach cramping and my mouth tasting like metal. These foods include broccoli, cauliflower, potatoes, lettuce, cheese, tomatoes, peanuts, green onions, cabbage, watermelon, bananas, melons, citrus, tropical, and berry fruits.

I have been warned that based on my allergic reactions to so many foods, and my anaphylaxis allergy to carrots, that there is an increased chance of my allergies progressing to a more severe reaction.

The bottom line for me is that I have a 50/50 chance that if I accidentally eat a carrot, I will go into anaphylactic shock and I could die.

So I carry two EpiPens and a bottle of liquid Benadryl with me at all times.

It was strongly suggested to me by my allergist that I purchase several EpiPens for home, in the car, in my purse, and in the office. Because, believe me, I can now attest to the fact that once the tongue starts to swell, your breathing passage gets blocked very quickly.

Most EpiPens come in a set of two. And EpiPens should be replaced every 12-18 months. My expiration date states 18 months, but last time I replaced my Epis at 12 months. Why would anyone take a chance and wait 18 months?

The last thing you want to do is stab yourself in the thigh while your breathing has all but stopped, only to find out that your EpiPen has expired and is too old to work!  That means death folks. I’m not joking.

I can’t even fathom how I would handle having a child with a deathly allergy. It must haunt parents 24/7. The only thing that can save your child from an anaphylactic allergy attack is to stick them in the leg with an EpiPen. But what if you’re not around? What if they’re at camp, in school, at a friend’s house?

As an adult, I can handle the realization and stress that I can die anytime, anywhere, anyplace. But there is no way in hell I could accept that kind of fatal possibility with my child.

I don’t know how a parent lives with the worrying all day every day. I do know they must buy a shit load of EpiPens to ward off any and all possibilities.

If I had a child who had an anaphylactic allergy, I would buy Epi sets for school, all the cars, friend’s and relative’s houses, camp and wherever and everywhere else.  And this is where a psychologist would probably come in handy.

Now comes the ridiculously unfair and outrageous part of the whole situation.

In 2013 I paid $264.50 for a two-pen set. I thought the price was absurdly expensive, particularly since I wanted to purchase at least four sets.

The company Mylan, has a monopoly on the product for at least one year. That is when a generic competitor will hopefully enter the market.

Until then, Mylan is just straight up greedy, and is just another example of what happens when a monopoly situation ends up in a company’s lap.

It’s morally wrong, and shame on Mylan for putting innocent children at risk of death. Not to mention me.

Now, if I want to purchase a set for my car, my husband’s car, my purse, and my office, I need to shell out approximately $2,560. Will I get reimbursed? No, because I have a high deductible health plan.

And how about the families who can’t afford even one set? Or worse, who have no insurance?

If I had a child with anaphylactic allergies, I would buy as many as I needed no matter what the cost. I couldn’t and wouldn’t take any chances whatsoever with the life of my child. Who would?

But for my personal situation?

I carefully safeguard my two measly EpiPens and my bottle of liquid Benadryl, and take them everywhere I go. And I’m already at 16 months with the same pens.  Stupid decision, I admit.

A letter to Congress called “Stop the EpiPen Gouging” asks that there be an investigation and regulation into the 420% increase (adjusted for inflation!) in the price of EpiPens since 2004. And so far, 116,620 letters have gone out. Take that Mylan.

Please click on this link and fill out the form right now?

Your letter might not save all of the people who die from anaphylaxis this year, but it might save the life of one person. 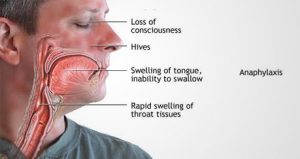