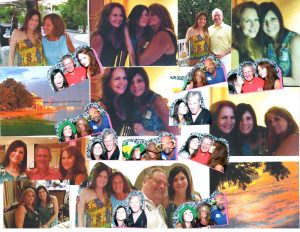 To go or not to go? That was my Staples High School Reunion question.

But after all the handwringing, I came, I saw, I conquered.

After I had written my blog post about whether to go or not to go, I received tons of e-mails and postings from hundreds of people—many of whom were former classmates, but many were not. There was an incredible outpouring of support, but more importantly, so many of those who wrote to me opened up about their own heartbreaking high school experiences.

So I want to thank all of you for your honesty and compassion. Because in the end, you were the reason I decided to suck it up and go.

And sure, it was the same old reunion-type dialogue. We talked ad nauseam about the good and bad old days. We reminisced about this store and that restaurant. We told horror stories about our drunken forays from Portchester to Westport. Sit-ins, Cardinal Puff, detention, lots of pink and green, Devil’s Den, Steak and Brew, the girl from uncurl, blah blah blah.

But here’s the thing.

And it was cathartic. Because for a brief few hours, I was able to go back to that time and place and rediscover that naïve teenager, with unlimited promise, within myself. I would like to think we all went back to that young girl or boy who possessed enormous opportunities, full of hopefulness, and youthful ambition and dreams that were actually possible.

It was restorative to hear stories about that young Teri I once was, and I was grateful to meet her again — this time through the eyes of others.

As Paul Simon so eloquently put it: “What a time it was, it was a time of innocence, a time of confidences.”

But my time of innocence has long passed, so it felt good to celebrate who I was back then and now as I enter my twilight years, to give me pause to reflect on who I am now and how my life has impacted the lives of others.

I drove by what was once Mario’s, Oscar’s, the Red Barn, and Sally’s Place. I made my way to the spots where the Big Top, the Ice Cream Parlor, and the Remarkable Book Store once stood. And despite the sweltering heat, I walked the length of the Staples football field and then took a peaceful stroll through the Nature Center. I drove by my old house — three times. And then I pulled my car over and wept a mixture of tears of joy for all that I have and tears of sorrow for all that I have lost.

As I shared stories with my fellow Stapleites, I realized that we walk a similar walk. And talk the same talk. And in our conversations, we all agreed on this: that our lives were rich, precious, painful, complicated, beautiful, miraculous, cruel, messy, and loving.

Life caught up with the most talented, the most beautiful, the best dressed, the most popular, and the most famous.

And finally, after 45 years, no one gave a damn who was the loser, how many times someone was married, who was the sports star, the captain, the smartest, or the reject.

Because at our age, we finally understood that no one had escaped the pain and disillusionment of loss, outer beauty, disappointment, illness, drama, death, poor decisions, bad relationships — you name it, we’ve been through it.

We spoke of our children and grandchildren, of siblings, wives, and husbands who were taken away from us way too soon, parents who committed suicide, and a son in desperate search of his birth mother.

Doctors, lawyers, and Indian Chiefs. A pastiche of 1971 spirits cloaked in 2016 bodies.

I was surrounded by compassion, confidence, vulnerability, and genuine interest in what I have been doing with myself for the past 45 years, with no awkwardness and no judging.

Okay, there was one moment of awkwardness when a former classmate excitedly pointed to me and exclaimed, “OH MY GOD! YOU’RE ALIVE!!!”

“Uh, yeah, last I checked,” I responded warily. She proceeded to explain (as best she could) that she had been telling people I was dead because my photo was on the deceased table.

I sprinted over to the table, and to my relief, there was no Teri photo.

But on the serious side, we lost so many classmates. A heartbreaking reminder that life is short and that if you believe in God, He most certainly works in mysterious ways.

And how about that Reunion Band? Wow. A bunch of 60-somethings dancing and grooving to outstanding music thanks to the talented Charlie Karp, Brian Keane, Mike Mugrage, Bill Sims, Bubba Barton, Bonnie Housner Erickson, Rob McClenathan, Julie Aldworth McClenathan, and Jeffrey Dowd. And a shout out to the incredible singers Kim Sullivan and Linda Satin Pancoast. And of course, let’s not forget David Jones on the spoons.

And who knew that Charlie had recorded with Buddy Miles, opened for Jimi Hendrix, and toured with Aerosmith? Or that Brian was the winner of four Emmy Awards?

And I don’t know about anyone else, but they really got me with their last song of the evening: Forever Young. Oh, if only it were possible.

All in all, it was an incredible couple of days thanks to the tireless, and I’m sure mostly thankless effort by Joanne Romano-Csonka and Bonnie Housner Erickson. I don’t know if we would even have had a reunion without the two of them. Time and time again, every five years, they put their all into making a beautiful event for the rest of us.

At the end of an incredible Saturday evening, we all said our reluctant goodbyes, full of bear hugs, kisses, and good wishes, promising to keep in touch. We probably won’t.

And the woman who thought I was deceased? Well, she wished me well and reiterated that she was thrilled that I was still alive. Me too, girlfriend!

So for anyone stressing out over an upcoming reunion — and who, like me, keep going back and forth anxiously asking themselves the “to go or not to go” question. I say go. Take a chance. Reach back in time. Feel like a kid again.

Long ago, it must be
I have a photograph
Preserve your memories
They’re all that’s left you
~ Paul Simon 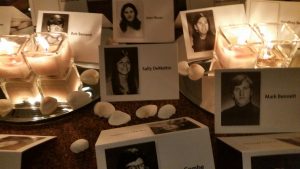 6 thoughts on “Yep. I made it to my 45th Staples High School Reunion!”