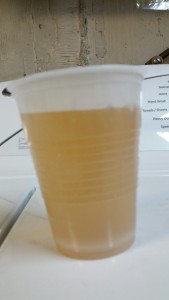 Since my blog post on February 24, concerning my murky brown water, I am no closer to an answer as to why it continues to be the color that it is. See that post  here: We Are All Flint Michigan

Before I continue with this blog post, though, I feel compelled, as I did in my last  undrinkable water post, to once again protect myself:

Now I am ready to blast off.

To state it nicely, my water is unacceptable.

Here is my question.

Who is to blame and why hasn’t sufficient money been spent to improve a fundamental need—and a human right—which is clean and drinkable water?

And sorry, but I don’t feel the government’s pain when they say they are out of money. And I blame both the Democrats and the Republicans for my brown and undrinkable water situation.

Since my last blog post, I have purchased a 10-cup Zero Water filtration system which seems to work well. I have been using the filtered water for coffee and boiling but will stick to Poland Spring for drinking.

I have also diligently continued my research as to why certain contaminants deemed unsafe in our drinking water remain unregulated by the EPA.

And more importantly, I have been researching so see if those contaminants are lurking in my dark brown and undrinkable water. And make no mistake about it, my research results have been fairly frightening.

To add insult to injury, my water company insists that:

“There are State and Federal water quality standards that allow certain levels of “contaminants” to be present in the water.  I must stress that Nassau County Department of Health has strict regulatory oversight of the public water systems and that the water delivered to the county residents meets all drinking water standards.”

Huh? Thank you for your assurances, water company, but if all of the above is true, please explain why my water is brown?

I would like to share a recent example of people thinking their water is safe to drink based on testing and state assurances and then found out otherwise.

The New York Times had an article on Tuesday, March 15, regarding tainted water in Vermont and New York.

Here are the cliff notes:

In recent weeks, several private wells in North Bennington Vermont have tested positive for the industrial chemical perfluorooctanoic acid, or PFOA. This contaminant has been linked to cancer, thyroid and heart disease, serious pregnancy complications, and birth defects, making North Bennington the latest in a growing list of American communities unsettled by a contaminated water scare.

PFOA was also discovered in the public drinking water in the village of Hoosick Falls, N.Y., prompting residents to rely on bottled water amid charges that the state took far too long to respond to the problem. It was also found in public wells in Petersburgh, N.Y., the site of a plastics factory south of Hoosick Falls.

Not surprising to me, the state of New York has repeatedly assured citizens of Hoosick Falls that their water was safe.

And last week, as environmental officials in New York and Vermont searched for other potentially contaminated areas, officials in Merrimack, N.H., announced that PFOA had been discovered there as well.

And the number of people found to be drinking water tainted by PFOA is almost certain to grow.

PFOA was once used to manufacture non-stick pans, microwaveable popcorn wrappers, and Gore-Tex boots— and practically anything that is non-stick, stain-resistant or water-repellent. But the health effects PFOA causes and the way it spreads and contaminates are not well understood.

In August of 2015, the nonprofit organization, Environmental Working Group, found that the EPA’s “safe” level of PFOA is possibly thousands of times too weak, and has been detected in 94 public water systems in 27 states, serving nearly seven million people. http://www.ewg.org/research/teflon-chemical-harmful-smallest-doses/pfoa-found-94-public-water-systems-27-states

And even more alarming was that when I checked out which 27 states had PFOA in their water, New York was one of them.

And guess what? It turns out that my county—Nassau—via the Town of Hempstead Water District, serving 110,000 people, has PFOA in its water.

Does that mean my water contains PFOA?

And get a load of this:

Even though New York State was advised that there were concerning levels of PFOA present in the water going back as far as 2005, they claim that no one did anything about it because PFOA was and remains an unregulated EPA contaminant.

Sounds to me like someone is trying to pass the buck.

And according to scientists, even as the chemical PFOA continues to contaminate water across the country, government agencies, from local health departments to the federal EPA, have yet to grapple with the full extent of the problem, or what it will take to clean it up.

It doesn’t take a scientist to tell me that the EPA needs to lower the level at which it says water containing PFOA is safe to drink. ASAP.

I mean come on already. Can the EPA assure me that my water, which may or may not contain PFOA, is safe to drink? And can my water company give me the same assurance?

Is anyone accountable here?

And now that I’m on a roll, here is something else I want to share:

When I had my hot water heater and pipes flushed out a couple of weeks ago, the company I used—Hot Water Plus—told me that they usually offer a 60-day clear water guarantee. Oh, but not in my neighborhood.

Maybe my water company can give me some insight as to why not?

And speaking of my water company, I recently noticed a water main flushing advertisement in my local paper, letting customers know that New York American Water is preparing to flush the water mains in its distribution system to help them provide us with high-quality water service.

Oh, and by the way, customers may experience discolored water. The flushing will take place Monday through Friday between 4/11 and 4/21—a whopping nine days.

I can only imagine what color my water will look like after they flush.

The advertisement also suggested we go to their website and view our water quality report. Except that, one needs to be a rocket scientist to read and understand it.

Here is what I have to say to my water company: Based on your claims, that the water delivered to my county residents may meet all drinking water standards, but that doesn’t mean it is safe and/or drinkable.

Many state officials, including New York, have suggested that the absence of strong guidelines from the EPA is at fault for the tainted water problems residents all over the country have recently uncovered.

And yet many of those residents had to aggressively push their local governments to look into the situation—instead of the other way around.

Our local government is responsible for managing and delivering a range of quality services to their communities, including drinkable water, correct?

But never underestimate the power of citizen engagement and our ability to speak out and protest against government inaction.

Thankfully there are concerned Americans out there who are willing to question and challenge government leadership.

And thanks also to a free press, the watchdogs who uncover the injustices and shout it out to the masses.

As is the case with all other economic and social injustices, Shakespeare said it best: “The fault, dear Brutus is not in our stars, but in ourselves, that we are underlings.”

1 thought on “Why Is My Water Brown?”