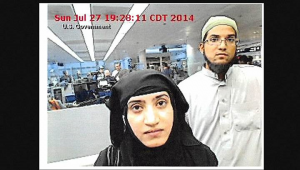 Two days after a knife attack in a London subway left a 56-year-old man seriously injured, all attention has been on the reaction of a bystander who shouted to the Muslim attacker: “You ain’t no Muslim, bruv.”

Ms. Tashfeen Malik, with a degree in pharmacology, could have taken advantage of the “American Dream.” But that wasn’t why she came here. Malik’s sole purpose for coming to the U.S. was to destroy the American dream.

And Malik took advantage of a relatively easy way into the U.S.

She was granted a K-1 visa, also known as a “90-day-fiance’ visa,” which has long been considered a questionable and often fraudulent way for foreigners to gain entry into the U.S.

Everyone, including the FBI, is investigating the “why.” The answer to the “why” is simple: Radical Islam believes that Muslims are destined to rule the world and that the West must be confronted and dealt with.

“The two killers were radicals for a long time,” the FBI was quoted as saying yesterday.

So you tell me. Their families were unaware that they were radicalized?

Tashfeen Malik’s mother lived with them. She never noticed the arsenal of weapons in the couple’s two-bedroom townhouse?

Where was Malik’s mother when Malik and Farook donned black masks and tactical gear, grabbed tons of weapons, and ran out to kill 14 people and wound 21 others?

According to news reports, Malik’s mother was in the townhouse watching the couple’s 6-month-old daughter.

Now most of what Trump has to say has me shaking my head in wonderment. But I have to agree with him when he says “We are now at war.”

And here is what I have to say to all Muslims living in the United States:

You need to stand up for Americans and the American dream or go to some other country where you like the people and/or their government better.

If Muslims can’t be proactive and do the right thing, you are simply and frankly Un-American.

IF YOU SEE SOMETHING, SAY SOMETHING.