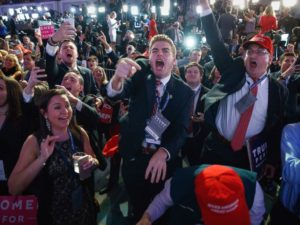 I fretfully fell asleep around 2 am yesterday morning, pretty much knowing Hillary Clinton had lost the presidential election, but praying for an electoral miracle.

I awoke at 3:30 am, and immediately morphed into a fretting-over-the-election-result-mode mess.

And to my chagrin and innermost fear—CNN confirmed the worst possible scenario: my girl Hillary was out.

Trump had obliterated my dream of witnessing the first woman president.

To be honest, I was devastated, paranoid, and unsettled. I sleepily turned to my rock solid husband and uneasily queried “Are we going to be okay?”

My husband, ever the pessimist answered, “We’re out of here already. It’s not our problem any longer. It’s for our kids and grandkids to worry about.”

His answer didn’t make me feel any less anxious, although it did allow me to fall back asleep.

Because my husband had so assuagingly, put it plain and straightforward.  We’re out of here already. It’s not our problem any longer.

To be clear, it takes a lot to rattle me. As far as I’m concerned, bad things happen to other people.

Simply stated, bad things don’t happen to my family, or me.

So why was I frantically asking my husband if “we” would be okay?

At 8:30 am, as I rolled out of bed, I painfully remembered the election loss, and cursed the day.

As I willed myself forward, I couldn’t help but obsess:

We’re doomed.  World War III is upon us. Trump is going to deport all of the Hispanics.  No one will have medical insurance.  Roe v. Wade is going to be eradicated.  My too-close-to-Jamaica-Bay house is going to float away.  The children of Sandy Hook Elementary School will never be vindicated.

I was in a funk. Yet I tried to put on a good face and make like I wasn’t crushed.

I listened to Hillary’s concession speech.

I hung on every word as President Barack Obama congratulated President-elect Donald Trump, vowing to work with his team to ensure a peaceful transition of power.

The only thing I had to look forward to was Bingo Night at 7 pm, organized by the New Horizon Counseling Center (NHCC), one of the largest non-profit providers of community-based mental health services in New York City, and extending their reach to residents of Nassau County.

As I attempted to shut out the noise of pundits, the media, the surrogates, I willed myself to think about Bingo Night and the incredible services that NHCC provides for mental health issues, developmental disabilities, alcoholism and substance abuse.

And since many of NHCC’s patients can’t afford treatment, I couldn’t help but stress over what would happen to NHCC when Trump is in charge. I quickly shoved that shuddering thought out of my Trump traumatized mind.

I was hell bent on enjoying a night of bingo.

Participate in a mindless game of chance, while imbibing in a glass or two of Chardonnay.

Chow down on some fund-raising food and hang out with a few friends.

When I walked into the Lawrence Country Club, I spotted an old friend. We talked about the election, the disappointment, the fear, the unknown, the future.

And then we talked about her daughter.

She was hooked on opioids. She tried like hell to get help. But in the end, the addiction got the better of her. She died.

“I wish I could see her one more time,” she said to me through tears.“ She would have loved to be here and play bingo.”

No bingo or future for my friend’s daughter.

I grabbed her arm, and we walked to our table.

Bingo we would play.

Better than thinking about the rest…