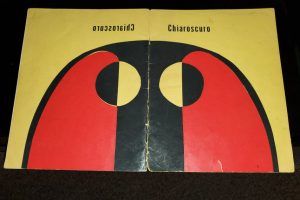 I was cleaning out some old files today and found Chiaroscuro, my Brevard College literary magazine from 1972-1973.

I barely remembered the magazine, so imagine my shock when I opened it up and discovered that I was the Editor-in-Chief!

I also forgot about the stuff I wrote in it.

Of the five things I wrote in Chiaroscuro, one screamed out from the rest:

Individuals are peculiar. They say and do things that they don’t mean and regret later. We are all like that some time or another.

This is how I remember her. Twelve-year-old Joanne was about four feet eight inches, forty-five pounds, with hollow, pitiful blue eyes. Due to her unnatural thinness, her face was sunken and homely. She was one of a family of twelve, her father deceased. Her clothes were tattered and worn and extremely old-fashioned. You’d think this tiny forlorn youth would be understood by her classmates. Instead, she was our victim, marked for ridicule and laughter. I recall that she always appeared to be carrying the world’s grief upon her shoulders.

My classmates and I would swarm around her during recess, like bees after honey, and make her cry. One dreary afternoon she shyly approached me and asked if I’d hopscotch with her. I indignantly pushed her down on the playground cement and stalked away, feeling somehow insulted. She didn’t cry, though, for I suppose she was used to it. For the remainder of the school year, we constantly annoyed, ridiculed, and hurt her. And she would attempt nothing, but frown at us and walk with her head down to a secluded corner of the playground where alone, she would sit and stare into some unknown space, and cry sometimes.

Then summer came, and the homely little girl was pushed out of my mind until opening a local newspaper I fell upon her picture. She had died of leukemia, a disease she had known she had for years.

And as I stared at the photograph of the homely little girl with her large hollow eyes and her sunken face, I cried…

for she was smiling…

Jesus. Was I a bully? I don’t even remember Joanne.

Did she even exist?

What was twelve-year-old Theresa trying to say?

I can’t imagine that I would bully, but then, if Joanne wasn’t real, who was I writing about?

And her clothes couldn’t have been tattered, worn and old-fashioned because we all wore uniforms.

Or maybe I saw Joanne outside of school in crummy old clothing.

But back in the day, I wore used clothes and shoes from Goodwill, so who was I to judge?

And why would I make fun of a homely scrawny kid who appeared to be carrying the world’s grief, when I was similar to Joanne in so many ways.

This also got me thinking about all kinds of places and times and events — triggers be damned.

I shoved Chiaroscuro back into my filing cabinet, depressed, not only by the thought that I might have been a bully but at the possibility that in some twisted way, I was Joanne.