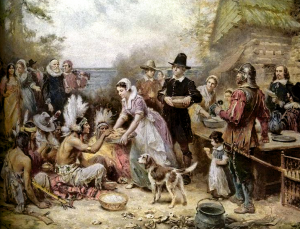 When I was in London last November, everyone kept asking me the same question:

Why are Americans so obsessed with Thanksgiving?

I didn’t want to insult anyone, so I left out some of the Pilgrim stuff.

How would they have felt if I told them that the Pilgrims were refugees fleeing persecution due to the brutality of the English monarchy?

They would surely have been insulted if I said to them that the Pilgrims fled England because of the despicable treatment by their government due to religious, cultural, and societal intolerance.

So, I told them the bare bones of Thanksgiving:

In 1620 the Pilgrims sailed from England on the Mayflower and landed near Plymouth Rock in what would later become Plymouth, Massachusetts. The Pilgrims had a good harvest that year, so they wanted to celebrate.

During that “First Thanksgiving,” European Immigrants broke bread with their friendly Native American neighbors in harmony and peace.

I didn’t tell them that the friendship between the immigrants and the Native Americans didn’t pan out and that most of New England’s native population was wiped out over the next few decades.

But what I did tell them was that every year we continue to celebrate the first time that races and cultures came together and left out the ugly stuff that happened after that initial Thanksgiving.

I also told them that in 1863 Abraham Lincoln made it an official national holiday. And that Lincoln proclaimed Thanksgiving as a holiday just a few months before he delivered the Gettysburg Address, declaring that in America, all men were created equal.

Several Londoners asked me if that meant that Thanksgiving is a celebration of American equality.

My answer was that Thanksgiving celebrates what makes America so great: Religious and personal tolerance, the belief that we are all equal, and the inclusiveness of every culture.

As I explained Thanksgiving, I said the words, but they felt empty to me. I wasn’t buying my explanation.

If I wasn’t buying it, why should they?

Here I was tying Thanksgiving together with America’s core values, but instead of feeling pride, I felt embarrassed, like I was an imposter.

And as I explained that Thanksgiving was a celebration of American values, not only could I see their pessimism, but sadly, inside, I felt it as well.

As I spoke out loud about American racial and religious tolerance, combined with the acceptance of multiculturalism, I was asking myself:

Am I talking American bullshit? Is Thanksgiving a sham? Is it merely an outdated holiday with no actual meaning?

God help us if it is.