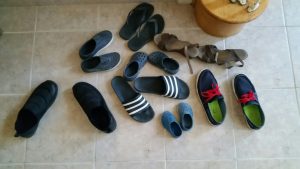 I recently spent a euphoric family sleepover weekend at home with my loved ones.

In the middle of a sleepless night, as my loved ones slept, I passed the pile of shoes near the front door and was compelled to photograph them.

Proof that although I was stressed and sleepless, love was all around me.

The image of my families’ footwear told the story, without my having to say one word.

The adult female and male shoes, baby girl shoes, and little boy shoes, helter-skelter in the entranceway was the dead giveaway that a lot of my favorite people were “in the house.”

As I recently combed through my phone photos, the family shoe image jumped out causing me to pause and reflect on the whole shoe thing.

Shoes can speak volumes about a person and their personality. And shoes can oftentimes speak for themselves.

They can also serve as a symbol for family gatherings, historical events, and more.

No matter what the situation, shoes will most likely tell a story.

Where have your shoes taken you? What do your shoes say about you? If someone were to spend a day in your shoes, what would they experience?

Early in my life, I recall feeling horribly embarrassed by my shoes. Many of them had been purchased at the Salvation Army, and because my feet were so big (I still wear close to a size 9), I often wore boys’ shoes.

And everyone has heard the old adage: You can tell a man by his shoes. Or a woman.

Two starkly different perceptions are conjured up in my head when thinking about shoes: The dark vs. the light visual.

The light side first:

My babies’ first pair of shoes. (How I wish I would have bronzed them). My daughter’s orthopedic ankle-high boot that attached to a bar brace at night, ballet slippers, tap shoes, and her first pair of heels. My son’s first pair of soccer cleats, ice skates, and wingtips. And all those uber-expensive sneakers the kids insisted they had to have because everyone else was wearing them.

My despised but admittedly comfortable saddle shoes I was forced to wear at Saint Ambrose Catholic School for eight long years, my white go-go boots, penny loafers, and Mary Jane’s.

My first pair of designer shoes; Manolo Blahnik’s bought in error. After an afternoon of champagne celebrating at the Four Seasons, I saw a gorgeous pair of black bowed heels in a store window. When I tried them on they fit like a glove. I thought the price on the box said $77.00. I charged them in my champagne stupor, and only realized on the train ride home that my receipt said $770.00. Non-refundable.  What a difference a 0 can make.

If you are a regular reader of my blog posts, you know there will always be the darker, more sinister side of things.

The dark side now:

I insisted on burying my grandmother in her slippers because she always complained that her bunions were killing her. Except lung cancer killed her in the end.

On 9/11, as the towers burned and then crumbled, women yanked off their high-heels so they could flee the cataclysm as quickly as possible. Heels don’t make for fast running. A pink spike here, a black slingback there.

Blood-stained, dusty, almost-unrecognizable shoes from that unfathomable Tuesday. One woman got her shoe and foot caught in a piece of twisted steel and thought she would die there. Someone helped to free her foot, and she recovered her shoe. He saved her life but she never found him to offer her thanks. Maybe he died.

Others discarded their shoes as they trudged through stairwells flooded with water from fire sprinklers. And the entire floor of the Battery Park tunnel was strewn with shoes from people taking them off to run as fast as fast could run.

A grisly photograph sent to me by a colleague of a pile of bloody shoes belonged to victims from a site of a terrorist blast in Kabul, Afghanistan on July 23, 2016.  Some still had bodiless feet and legs attached to them.

On a visit to D.C., a lone pair of dirty old boots left at the Vietnam Memorial Wall.

On the wall of the shoe room was the following poem by Moses Schulstein:

We are the shoes. We are the last witnesses.
We are shoes from grandchildren and grandfathers
From Prague, Paris, and Amsterdam.
And because we are only made of fabric and leather
And not of blood and flesh,
Each one of us avoided the Hellfire. 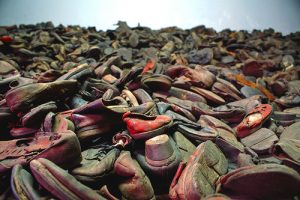 2 thoughts on “Every Shoe Tells a Story”