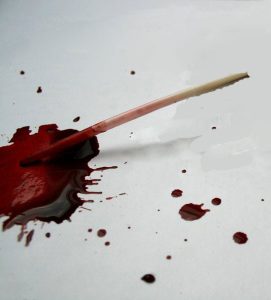 Trump, Jeff Sessions, and the rest of his administration are trying hard to undermine and erode our press freedoms. I say good luck with that.

As American citizens, the appalling and worrisome efforts by our president to suppress our free press and freedom of speech should be our “red line.”

And I have unquestionable faith that if ever our press freedoms are in real jeopardy, most of us will do whatever it takes to protect our right to speak freely and the written word.

I must say though, that I am unnerved and alarmed not to be able to write “all” of us.

It is my belief and faith in “most” of my fellow citizens that Trump and his political lackeys underestimate the power of the written word.

Below is a heartbreaking but hopeful story about freedom of information, and the unsinkable power of the written word.

His crime? Fighting for freedom of speech.

For his offense, Mr. Omari spent close to a year in a series of wretched prisons.

Nine of those months were spent in a fetid underground jail overseen by Maher al-Assad, the brother of the brutal dictatorial Syrian President Bashar al-Assad.

The why and how Mr. Omari was released still remains unclear, but while he was detained he never gave up on the written word and the power of information.

On Tuesday, August 8, Mr. Omari carefully and tenderly laid out five scraps of worn material that had secretly traveled with him in the collar and cuffs of his shirt, to the U.S. Holocaust Memorial Museum’s preservation center.

Those five scraps contained the names of 82 prisoners in the faith and hope of informing their families of their whereabouts as well as to document the atrocities against them.

The fading names on the five scraps, which included the prisoners’ names and location, were scratched on small bits of fabric cut from the backs of their shirts.

The invaluable information written on those five measly strips was produced by using broken chicken bones from their paltry food rations as pens, and a mixture of blood from their rotting gums and flakes of rust from their iron prison bars as ink.

The written word in blood and bones.

The scraps of priceless information were carefully and secretly sewn into Omari’s shirt, as ruthless Syrian government guards fastidiously watched over them.

Omari eventually smuggled those bloody scraps out of his deplorable underground prison, past brutal Syrian government forces, and safely across oceans.

Nothing was going to stop Mr. Omari from immortalizing the names of his fellow prisoners.

Let Mr. Omari serve as a courageous and heroic symbol of the power of the written word and the lengths someone will go to disseminate information and stand up for truth and justice.