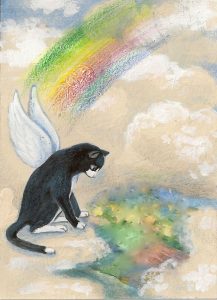 This whole Covid thing has been getting to me.

My husband keeps reminding me that people go through way worse things, and I get what he’s saying.

But I’ve been held up in my house for 38 weeks and counting, and I’ve only been to four places during my eight-month odyssey:

CVS for a flu shot, and three medical offices.

The last time I put gas in my car was in late February.

The weather channel predicted an unseasonably warm November 28, so we took advantage of what would probably be the last time we could enjoy our family outdoors and invited them over.

It had been a lovely day, but as we walked back from the park, there was a crowd of kids and one woman stooping over something in the middle of a fairly busy street.

The “something” was a black and white tuxedo cat.

Just so you know, I’m not an animal person and haven’t been a pet owner for close to fifty years.

But just because I don’t have animals doesn’t mean I don’t care about them.

Anyway, the woman at the scene said that the cat was pregnant. The poor cat seemed to have been hit by a car and was seriously injured. The woman took a box out of her car, placed the cat in it, sat the box on the sidewalk by the curb, and drove away.

What? Did she leave the cat on the side of the road to die? Pregnant and all?

Some of my family walked back to the house and suggested that I do the same. But three of us stayed with the cat, furiously making calls to 911, animal shelters, animal control, Nassau County, and the auxiliary police.

Every call we made resulted in the same response: There was nothing they could do.

I asked the crowd of kids to keep an eye on the cat while I went home to come up with a plan. I made some more calls, sent out an email to a rescue center, grabbed a heavy towel, and ran the six blocks back to the cat.

The kids cheered when they saw me—what a sweet bunch of kids they were. The cat was trying to climb out of the box. But then I covered her with the heavy towel, and she relented and put her weary head down to rest.

By now, it was past 4 pm, and it was getting damp and cold. But I couldn’t leave that damn cat.

I called animal control three more times and then called the Fourth Precinct a second time. The officer on duty again reiterated that there was nothing they could do. In tears, I explained to the officer that my heart was breaking for the cat.  I know the officer felt terrible because I could hear it in his voice, so I pleaded with him: “Please, officer, can’t you help me? The cat’s pregnant.”

He paused for a second and then said, “Don’t be upset miss, I’ll get someone over there.”

When the thirty-something police officer arrived, he brought tears to my eyes because he reminded me of my son. I can’t explain why.

He took a look in the box, made some calls from his car, and then said he couldn’t get permission from his superiors to take the cat to a shelter. But at least he tried.

I called animal control for the fourth time and tearfully said that the cat had to be freezing if I was cold. I asked the woman what kind of animal shelter would allow an injured and pregnant cat to freeze to death? I finally convinced her to send someone to pick up the cat, although she warned me that it could take an hour or so.

Those kids stayed with me until close to 6 pm. They would have stayed longer, but their parents called them all in.

I stood there in the cold, baby talking to the soon-to-be mommy cat, who was probably already dead.

At 6:30 pm, a van pulled up, and a young woman took the cat away. She gave me her card and told me to call in the morning for an update.

I had a sleepless night. My worries about the pregnant cat turned into concerns about Covid, school closings, my mom, vaccines, elections, my son, the countless animals out there in the frigid cold, and the fact that I had surrounded myself with all those kids who weren’t wearing masks.

Just my luck that after eight long months of quarantine, I could get coronavirus by trying to save a stray cat.

I called the Town of Hempstead this morning and received the sad news that the cat was deceased by the time it arrived at the animal shelter the night before.

I thanked the woman, who in turn thanked me and said, “You know in these trying times, there are a lot of really kind people among us. I like to call them angels on earth. Never forget that there are countless people out there who truly care. Too many to count. That’s a beautiful thing, right?”

I had been so busy feeling Covid sorry for myself, so obsessed with counting this vote or counting that ballot, that I forgot about the countless people out there who genuinely care.

Too many to count.

I said goodbye to the animal shelter lady, who in turn said:

“Never forget that there are angels among us and never stop caring about all of God’s children.” 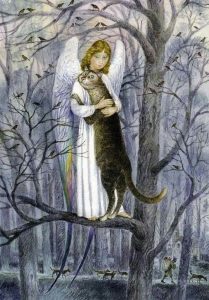