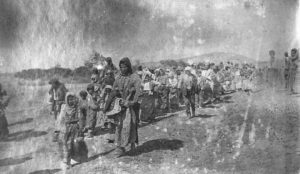 Turkey recently launched a ground and air assault against a Syrian militia that has been a crucial American ally in the fight against ISIS, days after President Trump agreed to let the operation proceed.

Translation: The more it changes, the more it’s the same thing.

I heard heartbreaking stories about my Syrian grandparents from my paternal aunts and uncle.

From approximately 1914 to 1923, terrified Syrian Christians, Syrian Jews, and Armenians were forced by the Turks into hard labor, murdered, raped, robbed, starved, and if they were lucky, deported.

They were called Ottoman soldiers from the Republic of Turkey back then.

My uncle once described the horrific experiences his parents went through as the “Turkification” of Syrian border towns and villages.

Turkification gave the bad guys the license to expel, kill, and destroy anything or anyone non-Turkish.

Christians and Jews were seen as a danger to the integrity of the Ottoman Empire.

The Ottoman soldiers were systematic, and the killings were well organized and state-sponsored.

They needed to clear out their border, and so they did. The Turkish government denies that they slaughtered innocent men, women, and children, but they lie.

Hearing Trump’s words: “They had terrorists, they had a lot of people in there they couldn’t have …. and they had to have it cleaned out” gave me the chills.

The president of the United States called for northern Kurdish Syria to be “cleaned out.”

They’re at it again, I thought to myself, but this time with the assistance and blessing of my president.

When is enough enough? Have we as a country no shame? Where is the outrage? Why are we not taking to the streets?

These were my thoughts as Trump spewed his hateful words.

According to my uncle, my Syrian grandmother was either Christian or Jewish.  She had sisters who were raped and slaughtered, although he doesn’t know how many sisters she had. She hid and somehow escaped to France as did one brother.

I still have so many questions.

Did my grandmother have more than one brother? How many sisters did she have? What happened to her parents?

My grandfather was a Syrian Christian who saw the writing on the wall.

The Turks wanted to clear Turkish soil of Christians, including the Syrian border, and he was on the run.

My grandparents were from an area called Suedeyeh in the Hatay Province, although I’m not sure of the spelling.

But what I am sure of is that Turkey eventually annexed the Hatay province and after the area was cleaned out, Suedeyeh was no longer part of Syria and renamed Samandag.

Were it not for my grandmother and grandfather’s escape to France and then to the United States; I wouldn’t exist.

I recently read that there were a lot of German officers in Turkey during the massacres of the Syrian Jews, Syrian Christians, and the Armenians, who in WWI went back to Germany.

What happened in Turkey left an indelible impression on the German officers and many of them ended up in the Nazi party.

And we all know how that ended.