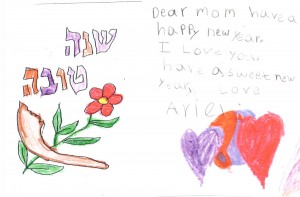 In 1995, I received the Rosh Hashanah card above, from my then seven-year-old daughter Ariel.

It was the first card she ever gave to me. And she sent it via the post office, stamp and all. I was impressed.

The Rosh Hashanah card arrived on September 25, which coincided with my late grandmother’s birthday. So it had even more significance for me.

When I opened it, there were two hearts—one purple and one red. Connecting the two hearts was a red and purple blob.

“The little purple heart is me,” Ariel said proudly. “And the big red heart is my brother.” (Her brother and my first born, was eleven years old at the time.)

“And the yin yang in the middle is you, Mommy.”

I was the yin yang?

To fully comprehend the significance of being the yin yang, I looked it up in the dictionary.

Two principles, one negative and feminine (yin), and one positive and masculine (yang), whose interaction influences the destinies of creatures and things.

At that moment, I felt terribly important. Almost overwhelmingly so.

In an instant, I forgot about all the tsuris which was eating away at me. I put aside how tired I was, and how defeated I felt.

And even my divorce, several years earlier, shattering my dreams and my children’s innocence, seemed almost acceptable at that moment in time.

“I can do this,” I recall saying to my weary self.

Because I was the Yin Yang in my daughter’s life.