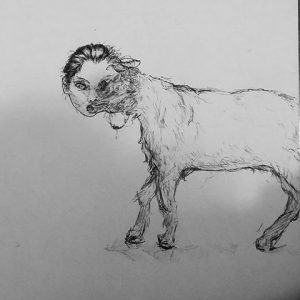 My sleep patterns are substandard at best.

And what little shut-eye I do manage to sneak in, is more than often consumed with a never-ending succession of movie-worthy dreams; chock full of ideas, emotions, and images.

Unfortunately for me, way too many of those visions involve wild menacing beasts, which make them more nightmares than dreams.

These epic brain dumps typically wake me up in the early hours of the morning in a heart-pounding, anxiety-heightened sweaty state.

I call them my bogeyman wake-ups.

My typical bogeyman wake-up goes like this: I open my eyes, paralyzed with fear. I quickly turn on the light and check the room. I pull out my notebook from the nightstand next to my bed and furiously write down everything I can recall. Sometimes this exercise takes ten minutes, while other times it takes two to three hours.

If the image or idea is particularly vivid, I can write an entire essay until I either run out of words, am mentally exhausted, or I’ve self-talked myself to calm it down.

Once I’m calm, I’m usually also wide awake, so I regularly turn on my tablet and research the why of all of it.

I recently found a quote by Sigmund Freud answering his why of all of it, which stuck with me:

“On my way to discovering the solution of the dream, all kinds of things were revealed, which I was unwilling to admit even to myself.”

This past Tuesday my bogeyman alarm woke me up at precisely 3:02 in the a.m.

The apparition was an animal image combined with a question: How can I escape?

The dream started out with a very scary goat.

But this goat was a scary doozy, and because I was in a corner, the goat was even more terrifying.

I wrote “scary” and “goat” in my notebook.

And then, with nothing better to do with my drenched and anxious self, I grabbed my tablet and looked up, “scary goat.”

“On my way to discovering the solution of the dream…”

I then looked up scapegoat: A compound of the verb scape, which means “escape” and two Hebrew translations/interpretations. 1) A possible misreading of the Hebrew word ‘ez ‘ozel (goat that departs) and 2) the Hebrew proper noun Azazel (demon).

I also discovered that In Leviticus 16:1-34, a goat was used in a ritual by a rabbi on Yom Kippur; where the rabbi symbolically loaded a goat with the sins of the Israelites and then let it loose into the wilderness to die.

The bottom line in Leviticus 16: that unsuspecting harmless goat who did nothing wrong was blamed and punished for the mistakes and sins of everyone else.

I continued my research.

By definition, a scapegoat is a person who is blamed for all that goes wrong, regardless of the guilt and wrongdoing of others. Scapegoats are repeatedly subjected to character assassination, abandonment, betrayal, and outright hatred by family members.

Scapegoating is also a way for adult children to hide familial abuse by blaming everything negative that happens, on one particular (and innocent) family member.

Further, scapegoating by adult children is usually due to having one parent with a personality disorder. To protect the parent with the mental disorder, the adult child uses the other parent as their scapegoat.

One article specifically used the following example: A wife leaves an abusive marriage, (which in and of itself takes enormous courage).  The family of the husband becomes paranoid that his abuse, dysfunction, and psychopathy will be revealed, and used against him, so the lies, brainwashing, and alienation begin until the scapegoated wife is attacked, denounced, alienated, and ultimately removed entirely from the familial picture. The scapegoating is used to deflect accountability for the husband’s abusive behavior.

“…all kinds of things were revealed which I was unwilling to admit even to myself.”

Out of that scary goat dream, I had an epiphany:

The hurtful accusations and condemnation I have endured over the years were explicitly designed to protect an abusive family member. I was scapegoated and sent out into the wilderness to shrivel up and die. But now that I’ve found my way back home, I can finally stop beating myself up. I can eviscerate the self-doubt and let go of trying to work out a relationship that I now see is sadly impossible because the one that I miss the most is complicit in all of it.

The goat wasn’t the demon; the goat was the target.

What started as the mother of all nightmares turned into a miraculous and most welcome wake-up call.