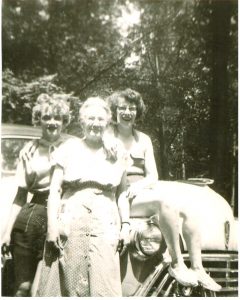 I spent my early childhood years living with my mother, grandmother, and great-grandmother. Many on the outside thought our living arrangements were unusual. To them, I was living in a broken home.

To be clear, there was nothing broken about our home, our relationships, or our bond.

And sure, we struggled, but there was a lot of big love.

My desk area is covered with photos of me with the three women who shaped and steered my life.

I often gaze at us and wonder: Who was I to them? And who were they?

My grandmother barely knew her father, and my mother and I never knew our fathers at all.

I was an only child, and so was my mom, so the three women in my life were all the family I had—or needed.

My great-grandmother lost her mother when she was four, so I can only assume that she knew her father well. Unfortunately, I never asked her much about her life.

I do remember her telling me that her husband—my great-grandfather, had been involved in a terrible accident which rendered him a vegetable. I never forgot the story because even at a young age, I felt her pain. She told me that he spent most of his adult life in an asylum. And I could see from the telling, she was ashamed.

Through ancestry.com I was recently able to find a 1930 census document with my great-grandfather’s name on it. He was indeed a long-term patient at the Augusta Maine State Hospital for the Insane. And according to the records I was able to uncover, he spent at least 25 years there before he died in 1951.

We were four women, with no male heroes. A dysfunctional familial band of female strength on the one hand, full of unspoken male loss on the other.

There were no men in my early life—and that suited me just fine. Not that I knew any better.

How strange it is, then, that having been surrounded by women for most of my life, that I’ve never had a lot of female friends. In high school, I had maybe three close girlfriends. In college, I had one.

Even today, the females in my life are few and far between.

I suppose it’s because of those early days of being surrounded by loyal, compassionate, and unconditionally loving women.

But that was then, and this is now.

Perhaps I expect the women in my life to live up to a higher standard. Maybe a standard that is virtually unattainable.

We were four strong until at nine years old, my great-grandmother passed away.

And then after many weeks of tears and broken hearts, we were three strong.

My grandmother died when I was thirty.  I lost a heart-wrenching chunk of me and an enormous safety net.

She was my safest place.

Down to two strong.

She left me at a crucial time in my life. I threw up for weeks after her death thinking I was heartsick.

It wasn’t my heart. I was pregnant.

Boy did I need her guidance.

And then things went wrong. Really wrong. My life took some spins and turns and crashes and burns.

You could say I joined a circus for a few years.

I made some naïve and terrible choices. Don’t we all?

Down to one strong.

How I wish I would have asked my three strong women more questions about their pasts, their loves, their dreams, their aspirations, their regrets.

There are so many things I don’t know about them. I have way too many unanswered questions.

And way too many whys and hows and sorrys.

I so wish I could turn back the hands of time to live and love them all again and begin anew. 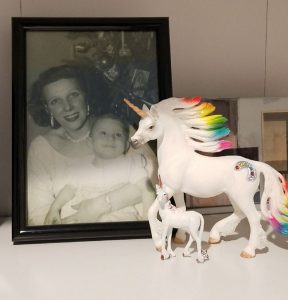 Me with my grandmother circa 1953

4 thoughts on “The Three Strong Women in My Life”