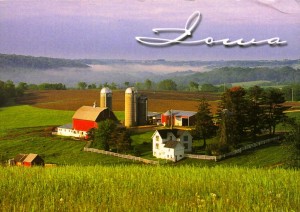 Many states are jealous of Iowa’s #1 status and question their lack of minorities: According to the 2014 United States Census Bureau, 92.1% of Iowans are white vs. the USA percent of 77.4.

In 1972, due to scheduling conflicts, the Democratic National Party innocently moved its Iowa caucus earlier than the New Hampshire primary. Since the caucus wasn’t considered to be in the same league as a primary, nobody paid much attention.

Here’s how the caucus works: There are no voting polls at all. Instead, registered Iowan voters assemble in a public place, town hall style, to review the candidates and choose who should get the primary nomination. The Republicans write their choice on a piece of paper and are counted by hand. The Democrats physically move into clusters based on the candidate they support, and the size of each group is manually tallied.

And while a caucus isn’t considered to be in the same league as a primary, Iowa’s ability to be the first state to weigh in during the presidential campaign has become the envy of most others.

The fluke change in timing in 1972 forever supplanted New Hampshire as the first contest.

That year, Jimmy Carter, after winning Iowa, won the presidency. The Republican response was to immediately move their Iowa caucus earlier as well.

There you have it—Numero Uno status for Iowa.

And until both parties make a fundamental change in their rules, Iowa will continue to remain first out of the gate.

Additionally, in 1972, New Hampshire took legal steps to protect its “first primary in the nation” status by passing a law that gives its secretary of state the power to change the date to precede any other primary by one week. A genius political move on their part.

Even though both the Democrats and the Republicans have it in their rules that Iowa goes first, it’s not legally binding. But if a state holds their primaries earlier than Iowa, the number of delegates the state can send to the national convention is reduced, a punishment wielded by both parties as a huge disincentive. No state wants to cut back on delegates.