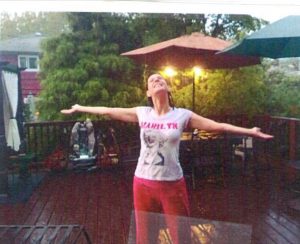 For as far back as I can remember I always thought my middle name was spelled Dawne.

I first saw the spelling of it in my teens, on my Social Security Card, and took it for granted that my mother for some reason or another chose to spell it that way.

And over the years I’ve joked with my friends about the “e” at the end.

Dawn with an e. A typo? A misspelling? A careless mistake?

But the sad truth is that every time I asked myself the why-the-e question, I always came back with the same follow-up:

The me was the harder of the two questions.

And the e? Well, that mystery has recently been solved.

Last month, while combing through ancestry.com I came upon myself, and I discovered that my middle name is Dawn. No e.

I was sure that ancestry.com had made an error, so I ordered an original birth certificate, and upon its receipt, I discovered that there was, in fact, no e.

But I’m still in the dark about the me.

On a recent Saturday, while listening to my favorite songs on my iPod, I passed a mirror and caught my image.

I intently checked out my reflection. I critically scrutinized myself.

Mirror mirror on the wall.

I looked old, and most definitely not the fairest of them all.

I was eyeing myself up and down, not in a critical way like I need to lose weight—but with an eye for WTF happened to me.

All the way back to fifty long years ago.

And that memorable day back in high school when I received my Social Security Card in the mail.

There it was. Three names.

My first name had been completely obliterated. Theresa had been replaced with Teri.

For my first few months in a new school and town, I had been viciously bullied and called “Theresa the greasah,” so a family decision had been made long before the Social Security Card arrived that my first name had to go.

And I was okay with that.

Terry with a “y” was deemed too masculine. Teri with an “i,” now that was an excellent Westport Connecticut name according to the fam.

I didn’t feel awful about it. But I was praying that “Teri” didn’t rhyme with anything hurtful.

So I was mentally prepared for the first name, but as I fingered the Social Security Card, the middle name struck me as odd.

I immediately thought that the e at the end was weird, but I wasn’t about to ask my mother any questions. That was back in the old days when children were seen and never heard.

So I begrudgingly accepted Dawne, although I would have much preferred Dawn.

And then there was my new last name.

It had been changed to something else because I had been recently adopted by my step-father.

Now, I was upset about that.

Actually, I was devastated by that.

Because that meant that my father, whoever and wherever he was, let me go.

He gave me up to some other man.

My father gave me up. He gave up on me.

Turns out I was wrong about that.

Turns out I was wrong about a lot of things back then.

I would come to find out almost ten years after my Social Security Card arrival that my last name was illegal, and then of course last month, that Dawn-with-an-e was a typo.

Just like my first, middle, and last name on that Social Security Card, I was all scrambled up and nothing was left of the original me. No security at all.

Back to the mirror, mirror on the wall.

There was no one to ask. No one to reassure or reaffirm who I was seeing, staring back at me.

No makeup, just plain-faced, with frizzed up hair, and haphazardly dressed in my daughter’s hand-me-down clothes.

Most people tell me I look like an entirely different person with vs. without makeup.

And many of them think they are being brutally honest when they confide to me that yes, I look better all dolled up.

“You don’t think I know that?” I always respond to them.

“Then why go out bare faced?” they ask.

Because I don’t care.

And because I feel the full force of me with a naked face.

And anyway, with the war paint, I feel fake, unnatural, itchy, unreal. Illegal.

In the old days, it was all about:

Every strand of hair in place. Check.

No makeup, naturally dried hair, dressed in hand-me-downs. That’s me. The authentic and real me.

Broken blood vessels, dark circles under my eyes, my disappearing eyebrows, and those despised sun dots and spots. I no longer call them beauty marks. I know full well what they are.

I feel the plain me is my best me.

The free, fresh faced me, able to run outdoors any time, and anywhere and immerse my whole self in a torrential down pouring of rain. No worries that my makeup will streak or smudge.

And it is so helpful when the tears come streaming down. No worries that black mascara will run down my face like one of those scary clowns.

The sensitive me, immersed in the unforgettable scent of a fresh storm, the mesmerizing pitter-patter sounds the wet stuff makes, and the hypnotic effect that each drip and drop have on my psyche as they gently or ferociously land on my makeup-free face.

Or the poetic me that adores the clean taste of rainfall as I gaze upwards with arms outstretched and imbibe in a wondrous drink from the clouds.

And when I sometimes wash my hair in the tumultuous downpour, I wonder if anyone who loves or loved me is looking out at the same tempest, at the same time, and dreaming about what ifs.

Because those who have been nearest and dearest to me, know I adore the rain and the dark, dreary days, the squalls, the windstorms, the whirlwind gales, all of them.

But gazing at my rainless, unpoetic, and makeup free mirror image, I studied the sad eyes sadly studying me back.

So many of us feel connected to our ancestral roots. We dream of tracing our familial trees. We dream of finding long lost family members or experiencing the Aha moment.

I have always believed that it was fundamental and essential to my self healing that I figure out my who and where.

I spent a lifetime trying to fit the pieces together, convinced that I couldn’t move forward until I stepped backwards in the hopes of figuring out where I had been. Who I was to people.

Some fifty years ago and way before the internet, I would drive around Bridgeport, trying to find streets, houses, and tenements, in a desperate search for answers, and something—anything that might spark a memory or two. Good or bad. Something solid to hang on to.

And then after the internet, and with the same driving courage, I was able to find out more about me and my mysterious roots.

My years of familial searching and then finding, taught me to be careful about what one wishes for.

And to be mindful that in the looking, one might actually find something, and that something might be worse than the not knowing.

As an example, I tried to find out who my father was for years. And once I was successful in my pursuit, I discovered that there was a massive divide between who I dreamed my father was, and who he turned out to actually be.

In my search for the truth about my father, the truth was indeed stranger, and much more personal and painful than fiction.

But I’ll save that story for another time.

Growing up, I was never sure about who I was. And sixty-five years later, I’m still partially in the dark.

And even though I’ve already unearthed some painful stuff, I’m not afraid of finding out more.

I was in the seek-and-you-shall-find mode, no matter what the outcome.

Call it a late-in-life crisis. But to be honest, this crisis has been a lifetime in the making.

I decided to treat myself to a tell-all for my 65th birthday.

I threw fearful to the wind and decided to research the two most sought-after companies who collect DNA information—Ancestry and 23andMe—before making my final decision about which one to go with.

Ancestry has sold over three million DNA kits and counting. It has user-generated content that has made it possible to produce more than 70 million family trees and offers access to over 16 billion online records.

And then there’s 23andMe.

More than 1 million people have been genotyped through 23andMe.com.

If you’re curious about why the company is called 23andMe: It’s named for the 23 pairs of chromosomes in each human cell. They also offer estimates of predisposition for more than 90 traits and conditions ranging from baldness to blindness.

I wasn’t interested in predisposition. That would be way too much information for my liking.

I wanted to find stuff out, but I’m not that curious.

It would be my luck to rummage around and find some unintended and wholly unwanted predispositions. Baldness? Blindness? No thank you.

I love rainstorms. Healthstorms, are a whole other ball of wax, and I prefer to stay as in the dark about them as possible.

So I decided to go with Ancestry.com.

For $99, I was sent a vial in which to deposit my saliva. I mailed it back, and three weeks later I received the written details of me.

Within minutes I discovered the new Dawn, no e.

When I finished reading the Teri report, I looked around my desk at all the fading black and white photographs of me as a baby, with my grandmother, great grandmother, and mother.

I thought about the patchwork quilts and crocheted afghan blankets, the nursery rhymes sung in French, the recipes for rhubarb pie and macaroni with hamburger casserole.

Try as I can, the words to the French ditty have long been forgotten, but I see in those photos that I was someone special to somebody.

And I finally realize that I don’t need the photographs to recall the love. I can unearth the adoration any old time I want to, in the deepest caverns of my mind.

I can ensconce myself in my grandmother’s afghan and quilts, amidst the quiet memory of the why and who I was at least to her.

The rest I guess be damned.

Because I finally feel at peace with me.  With or without the e.

4 thoughts on “A New Dawn Aka the Name Game”