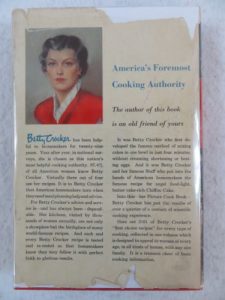 Weird as it might sound, Betty Crocker and my grandmother Mammy (MayMe) are inextricably connected.

And I would go so far as to say that Betty Crocker taught my English-illiterate grandmother how to read.

Whenever I pull out my Betty Crocker Cookbook (like today) or bake a Betty Crocker brownie or cake mix, I’m reminded of Mammy. Maybe it’s because, in my mind’s eye, Mammy was the quintessential Betty Crocker.

Let me try to connect the Betty/Mammy dots for you.

On October 21st, 1921, a cooking icon was born, conjured up by Samuel Gale, the head of the advertising department at Washburn-Crosby, and the company that owned Gold Medal Flour.

Mr. Gale and his all-male advertising and marketing staff were responsible for handling incoming mail from women seeking cooking guidance. Mr. Gale never signed his name to any advice he dispensed, knowing full well that no woman would ever trust a man’s cooking tips. Someone needed to sign the letters, so who could it be?

Gale’s recommendation to the higher-ups (all men), based on feedback from the lower-level kitchen staff working at Washburn-Crosby (all women), was to invent a female advice expert.

The last name given to this fictitious cooking expert was in honor of a retired and revered marketing director, William Crocker.

Betty, in all likelihood, was chosen because it was a wholesome, fashionable, all-American name and was one of the most popular names given to female babies at the time.

Gale then asked the company’s female employees to submit signatures they thought befitting of Betty. A secretary by the name of Florence Lindberg won the winning signature — and Gale added it to the closing of every letter that ever went out.

In 1924, when Washburn-Crosby began airing a cooking radio show out of Minneapolis, Minnesota, they needed a voice for Betty. They ultimately chose a Washburn-Crosby staffer Marjorie Child Husted, a field representative in their home economics division, who became the writer and host of the local WCCO radio show. The show became one of the longest-running radio shows in history.

In 1936 a portrait of Betty Crocker was painted by a successful female illustrator and portrait painter Neysa McMein and was used to depict her persona for over twenty years.

It wasn’t until 1945 that fake Betty was outed.

That year, Fortune magazine named Betty Crocker the second most famous woman in America, followed by Eleanor Roosevelt. The Fortune article also exposed Betty as an invention conjured up by advertising men looking to sell flour.

But by that time, her cooking advice was invaluable to millions of women across America, so nobody cared that Betty was a fraud.

In 1947, her first cake mix — the Ginger cake — debuted in almost every supermarket in the United States, followed by the bestselling Betty Crocker’s Picture Cookbook, published in 1950.

My first memory of cooking with Mammy was in the 50s, and I can vividly recall her struggling through the pages of her treasured Betty Crocker cookbook. Mammy couldn’t read or write English, so following a written recipe was difficult for her.

I would watch in fascination as she would match the words on the pages to the names of the packaged ingredients, like flour, butter, milk, and sugar, and then figure out the measurements by comparing the numbers on her measuring devices to those in her tattered cookbook.

As I got older and able to read the recipes for myself, I once corrected her use of applesauce (homemade, of course) instead of sugar, only for her to wag her finger at me and say, “trop sucré” (too sweet). That’s when I first learned the art of healthy cooking substitutions.

And because Mammy was English illiterate, if the list of ingredients were too long, she passed on the recipe. To this day, if there are more than ten ingredients in a recipe, my eyes tend to glaze over, and more often than not, I search for a simpler alternative.

In 1973, when I moved into my first apartment, Mammy bought me my very own Betty Crocker cookbook — the edition with a pie divided into six equal triangles of yummy-looking food photos in the middle of a red cover.

6 thoughts on “Betty Crocker and My Grandmother Mammy”