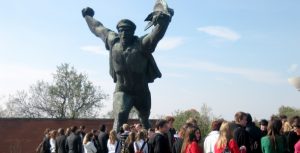 Approximately two hundred thousand Hungarians gathered in Budapest on October 23, 1956 to demonstrate against Communism and in sympathy for the Poles who had just gained political reform. One of the sixteen demands the Hungarians broadcast over the radio was the dismantling of Stalin’s statue.

And dismantle it they did. 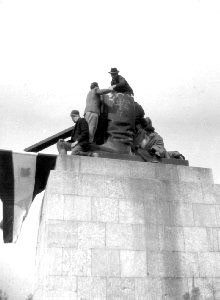 The 82-foot high monument of Stalin was ripped down and smashed on that day by enraged anti-Soviet crowds, leaving only his boots, in which they planted a Hungarian flag. 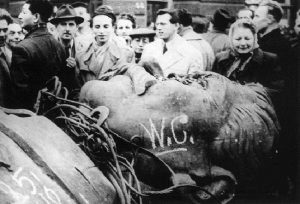 The statue of Stalin was demolished, leaving only his head in the middle of downtown Budapest. 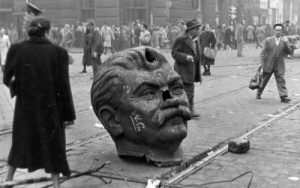 Twelve days later, on November 4, Soviet tanks rolled into Budapest and crushed the national uprising. Thousands were killed and wounded and nearly a quarter-million Hungarians fled the country.

What happened to Stalin’s boots I don’t know.

But a replica of those boots is on display in Memento Park, a remote open-air museum, high up in the hills of Budapest. 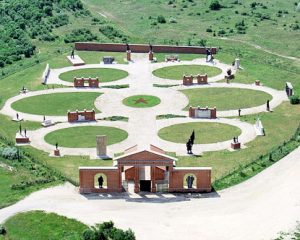 Also known as Memorial Park and Statue Park, this is also where 42 Soviet statues and monuments, removed from Budapest, immediately following the fall of communism, have ended their days.

After World War II, many colossal statues glorifying communist heroes and ideals were erected across Budapest by the occupying Soviet forces.

Immediately following the political changes in 1989, the future of the statues created and displayed during the communist regime caused heated debates. Many Hungarians reacted with hatred and wanted all statues, monuments, and symbols of the dictatorship destroyed.

It was László Szörényi, a literary historian who first mentioned the idea of a Statue Park in a 1989 article. The leaders of the new, democratic political system agreed with Mr. Szörényi.

In December 1991 the Assembly of Budapest came to a decision that districts should choose which statues they wanted to be preserved, and rather than demolishing them, they would be taken down and collectively placed in a park.

Since it was a sensitive and complex project, the Assembly announced an architectural design competition, which Hungarian architect Ákos Eleőd won.

Memento Park celebrated its grand opening on June 29, 1993, which was also the second anniversary of the withdrawal of the Soviet troops from Hungarian territory.

Several years ago, after a long day of touring in and around Budapest, my husband came up with the brilliant idea to “run” over to Memento Park and view the communist-era statues moved there.

It was 4 pm in the afternoon and the last thing I wanted to do after untold hours of touring was to take a 90-minute bus ride to see a bunch of commie statues.  Plus, the park closed at 6 pm which meant that we would have about 30 minutes to see the whole Soviet shebang.

The bar in the lobby of our hotel was calling my name.

It seemed like a no-brainer to me, so I told my husband “no thanks.”

As an aside, my at-home husband is a couch potato. He loves to hang around the house, play online chess, watch documentaries about Einstein, and lazily mosey on and around our deck and patio.

My vacay-husband never stops for one second; a whirlwind of running here, there, and everywhere, to see everything, anything, and nothing.

The bottom line for me is that vacationing with my husband is grueling, exhausting and mostly torturous.

So not surprisingly, he completely ignored my “no thanks,” grabbed my hand and off we literally ran to catch the last bus going to a graveyard of banished statues in the middle of nowhere.

My martini would obviously have to wait.

As the bus climbed the hills toward Memento Park, it was dusk, and slightly creepy.  The highway was deserted, and there were ginormous electric towers everywhere.

As I curiously glanced out at the doom and gloom sky, mostly obstructed by the towering power lines, I noticed a looming dark, colossal and menacing man, seemingly running in the distance. 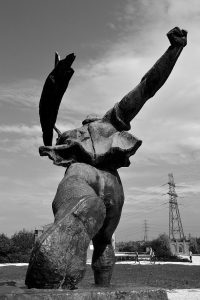 I got goose bumps all over my body as we inched closer and closer toward the mammoth statues and monuments. 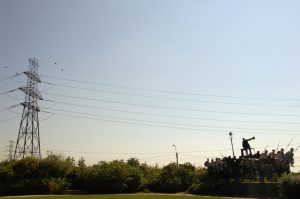 The gigantic monoliths of communist dictators and fictional role models from the era of repression rose menacingly above a massive concrete wall. 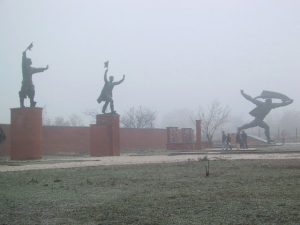 We had gone from modern-day Budapest into the past, traveling on a dreary and empty road toward a dark fortress. I was lost in thought imagining myself in an oppressive regime who had gained control over an entire country by creating a cult around looming tyrant personalities. 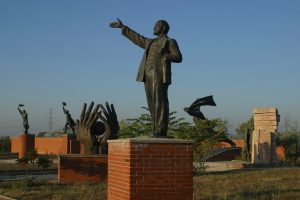 It was almost 5:30 pm when the bus pulled up to the entrance. We only had 30 minutes to walk around, so we tried to make the best use of our time.

And since we were the last bus to arrive, there were only a handful of visitors making the park all the eerier. 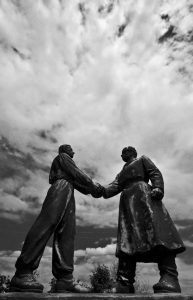 At the entrance stood two intimidating and imposing statues; one of Lenin on the left and the other of Marx on the right. 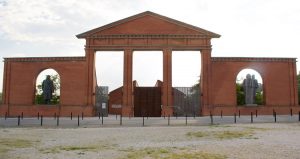 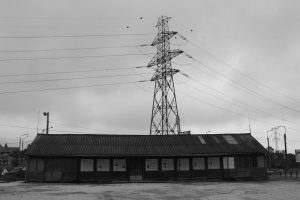 Mounted on a soaring stone base was a replica of the massive boots of Josef Stalin, representative of all that was left of the towering statue when it was famously pulled down in the 1956 uprising.  Though the revolution had been brutally crushed by Communist forces, the replica of the boots remained a reminder of the thousands who died in the Hungarian uprising. 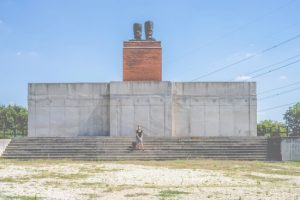 Standing next to these massive monuments was unnerving and I immediately felt the terror of their primary purpose. They were meant to intimidate and tower above everybody. 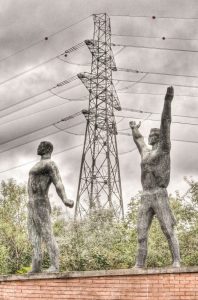 And despite the fact that they were now merely a collection of stone, metal, and bronze from a bleak past, and far away from their original locations, they still held enormous power over my psyche. 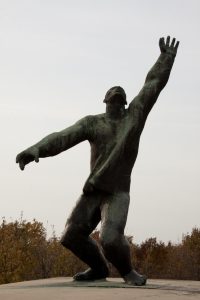 The statues and monuments were imposing, but the park design neither made a mockery of them nor honored them. And yet I still felt fear.

There was one character conspicuously absent. There were no surviving statues of Stalin. I was told by one of the staffers that they had all been devoured by the mobs before they could be saved.

Viewing the enormous statues was an eye-opener for me. And I was able to visualize history through those symbols—standing in their former prominent places throughout Budapest—and I was glad that they had been removed. 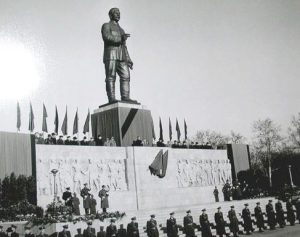 Though magnificent works of art, the symbolism of those towering monuments would have been a constant reminder to people of how great and powerful the Soviet system was in Hungary, a dark part of their past that they did not want to remember or celebrate.

And seeing them all together in Memento Park made it hard to believe that it had been less than 20 years ago that Hungary was part of the Soviet bloc.

Approximately 40,000 people visit Memento Park yearly. The park is the property of the Hungarian State but is operated as a private venture supported by revenue from ticket prices and earnings from the souvenir shop.

Those sky-high statues and monuments removed from their original locations years earlier pained me and offered a glimpse into the propaganda and official narratives that dominated Hungarian public life for the better part of half a century. 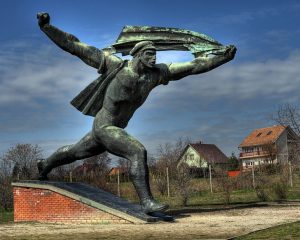 Thanks to the decision to remove and save the statues and monuments, they have been forever preserved and accessible for viewing, albeit in a very different context.

In their current resting place, the statues and monuments placed by the Communists in and around Budapest now serve as a reminder of the oppression felt by the people of Budapest and Hungary during the regime.

István Schneller, the Chief Architect of Budapest from 1994-2006 had this to say about the monuments:

“These statues are a part of the history of Hungary. Dictatorships chip away at, and plaster over their past in order to get rid of all memories of previous ages. Democracy is the only regime that is prepared to accept that our past with all the dead ends is still ours; we should get to know it, analyse it and think about it.” 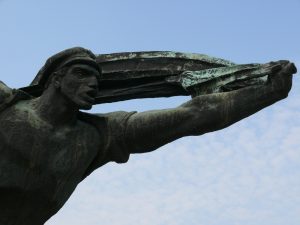 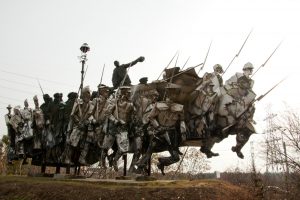