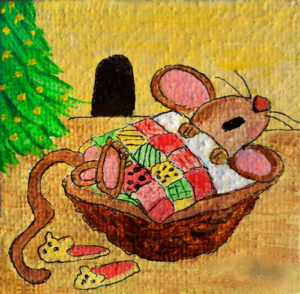 I often ask this question to family, friends, and colleagues.

The answer to my question never fails to enlighten me and speaks volumes about the person remembering.

It was late Christmas night and Mammy, (pronounced May-me), and I were sitting on the couch admiring what I thought was a truly magnificent Christmas tree.

Mammy was my grandmother—my surrogate mother. My mom was divorced, and very young when she had me, so Mammy was raising us both. I never knew my father.

Mammy used to explain to me that when I was a baby I was confused and couldn’t figure out who was the Mom.  Mammy used to call herself Grammy around me, but when I was old enough to speak, I bestowed upon her the weird name of Mammy.

According to Mammy, at ten or so months old I had brilliantly managed to come up with a name that was a cross between Grammy and Mommy.

Mammy was busily crocheting an afghan. Almost sixty years later I still have that afghan. I curl up with it nearly every night and wrap myself in Mammy’s memory.

Back to my first memory: Christmas night 1957.

I was four years old, and my head rested on Mammy’s shoulder. I was trying to be especially quiet because Mammy was preoccupied with her crocheting, and I was hoping that if she forgot that I was there, I could stay up a little later. I closed my eyes and was drifting off until Mammy began to softly poke my arm.

When I looked up at Mammy, she had a mischievous look on her face, as she put her finger up to her mouth to shush me. She then took her finger off her lips and pointed toward the tree.

So I took Mammy’s cue and gazed at our sparsely decorated tree, adorned with a single strand of blinking lights, a teensy bit of tinsel and a few ornaments, most of them home-made.

Underneath the tree sat my treasured present from Santa Claus.  She was the most beautiful doll I had ever seen. I named her China because she had the silkiest long, shiny black hair, and a flawless porcelain face.  It must have been an expensive doll—much more than Mammy or Mommy could afford.

Anyway, China was sitting under the tree, wearing a red organza pinafore that Mammy sewed for her which to my delight perfectly matched the red Christmas dress she had designed for me.

As I sat looking curiously at the doll under the tree, wondering why Mammy was pointing and shushing, I noticed a tiny mouse sniffing around China. I looked up at Mammy terrified, but she was smiling ever so softly, still shushing me with her pursed lips.

So I looked back at the mouse with a different eye—from Mammy’s tender perspective.

As a child, I was entirely molded by those three women in my life. What they saw I saw. What they felt, I felt.

Mammy had no problem with the little mouse—it was just a baby after all, and so I was all right with it too.

The mouse sniffed around my doll and then snuggled in its lap.

I looked at Mammy’s bright and smiling face, as she lightly kissed her index finger and then playfully touched the tip of my nose with it.

Taking my cue from Mammy, I lay my head back on her shoulder, watched the baby mouse sleeping and then closed my eyes, and drifted into my own peaceful sleep.