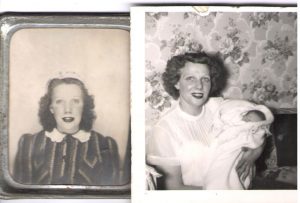 I know what you’re thinking. MORBID!

But I don’t feel morbid at all.

I’m looking forward to spending Thanksgiving with my grandmother.

The big day is almost upon me, and I’m excited about sharing it with a lot of the people I love the most and who will help to make my Thanksgiving special, including my deceased grandmother Mammy (MayMe).

If you are a regular reader of my blog, you know that my grandmother was the matriarch and head honcho of my family of four women, which consisted of Grammy Nadeau (my great-grandmother), Mammy, Mommy, and me.

Now that I have finally published my second book, The Day It Snowed Popcorn; I’ve started on my third, a cookbook titled Tu Me Manques.

When I first thought about what the title of my cookbook would be, Tu Me Manques was the name that kept churning around in my head over and over again.

There was another possible title that kept creeping into my psyche as well: Mon Petit Chou.

Mon Petit Chou was my grandmother’s pet name for me, which means “My Little Cabbage.”

As a kid, I wasn’t thrilled about being compared to a gassy vegetable, but Mammy said it with such affection that I begrudgingly grew to accept her quirky nickname for me.

Now, I revere the pet name and wish I could hear her say it to me one last time.

While it became a choice between the two titles, Tu Me Manques seemed to be the most fitting name for my book of Mammy’s recipes.

On the surface, “Tu me manques” means I miss you in English.

However, it has a more profound connotation to it.

It’s more like you’re missing from me, you’re a part of me, you’re crucial to my existence, just like a limb, an organ, or blood.

This deeper connotation perfectly sums up my sentiment about Mammy.

As if Mammy were a body part of mine, and now that Mammy is gone, I lack or am missing that part.

That body part is now missing from me.

She is forever missing from me, but her recipes are her legacy. And mine.

Sorry if this tu me manques business is going on too long.

But I’m not sorry that I found the phrase.

Because it almost makes my grief explainable. I’m almost able to put the pain and loss of Mammy into words.

Whatever the translation, the title Tu Me Manques is a done deal.

I was once asked what I would like to have as my last meal, and my quick reply was:

Anything made by Mammy.

Trying to recreate the foods my grandmother cooked is to celebrate her and to forever preserve her memory through the taste and smell of her recipes.

Mammy served up lots of kisses, lots of good advice with a constant side of delicious and comforting food.

My daughter Ariel once asked me if I had any recipes handwritten by Mammy.

Unfortunately, the answer is no.

French was Mammy’s first language, and she was just fifteen when her father was rendered a vegetable from a traumatic brain injury.

As a result, she was pulled out of school to help work the farm and take care of her younger siblings. She was one of ten kids; one died at birth.

Mammy was barely able to read or write in English, so I have nothing left of her handwriting at all.

I once had a birthday card, but during an unfortunate time in my life, it went missing.

Mammy wasn’t literate, but she was one hell of a cooker.

Unfortunately, her recipes were all in her head and never written down, except by me over the years.

When my grandmother died in 1983, so did all of her recipes.

I have spent the better part of the last 36 years trying to recreate them.

So today, when I sat down to plan out my Thanksgiving dinner, Tue Me Manques, was what I wrote down.

What better time to start testing my memory of Mammy’s holiday foods, than a Thanksgiving gathering when family heirloom recipes are traditionally in abundance?

And as I chop and mix and bake, I’m sure I’ll give thanks to Mammy for believing in me and loving me the biggest and the best of anyone ever.

I spent a lifetime doubting myself, but I never doubted her love for me.

But mostly, I will thank her for the cherished memory of a woman who was broken time and time again, tested in ways that still bring me to tears.

And yet, she pulled herself up, stood tall (even though she was only a little over 5 feet), and always walked with dignity and pride.

And I will also thank her for the precious space she holds in my heart that’s filled with lessons taught of empathy and strength and resilience.

As I prepare Thanksgiving dinner this year, I know Mammy will be in the house.

And while I cook away, I’ll imagine Mammy at my side, guiding me along.

“Not so much of this. A little more of that. Don’t forget to taste everything.”

And I will fondly recall how we stood side by side, back in a time that is becoming harder and harder to remember, mixing and mashing, while my Mammy would tell me stories of young love and yesterdays, sprinkled with her unforgettable giggle, a twinkle in her beautiful eyes and just a hint of regret.

9 thoughts on “Thanksgiving Dinner with My Deceased Grandmother”