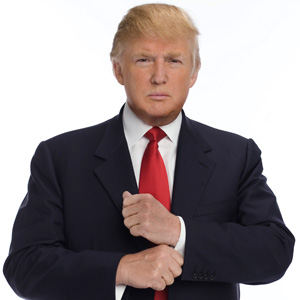 I was going to title this blog “Bush Got Trumped,” but let’s be real here, Jeb has pretty much become a bush-league player. Pun intended.

One measly ex-Governor? No—that’s not Trump’s style. In all his trumped up glory, the Donald has taken on the entire Republican Party.

Some say that Trump is running to ensure the presidential win for Hillary. He’s acting as her apprentice so to speak. The theory is it’s a win-win for Trump. He gets the Republican nomination and is a hero. Hillary becomes the first woman President of the United States and the Donald? Well, he’s a hero.

I don’t buy that theory. Because that’s not how Trump rolls. He actually believes he can win this “thing.”

Now, I don’t believe that Trump will become the 45th President of the United States. But I do believe that a Trump nomination could possibly undo many of the gains Republicans have made in the recent State and local elections. And then there goes the Republican majority in the Senate.

According to a Wikipedia page on the 1964 Congressional elections, Lyndon Johnson’s landslide victory over Barry Goldwater allowed his Democratic Party to gain a net of 36 seats from the Republican Party, giving them a two-thirds majority in the House. This was the largest House majority held by either party since 1936.

Many of the highest-ranking and wealthiest Republicans want Trump out. But who needs to publicly bicker and scrap with the insult-spewing Donald?

We all know that Trump loves to belittle and berate his critics 24/7. That’s been his game plan since day one, and it seems to be working well for him.

And let’s be honest, it doesn’t look like Trump is getting fired anytime soon.

I wasn’t a fan of Trump’s reality game show The Apprentice, but this is one reality show I’m not going to miss.