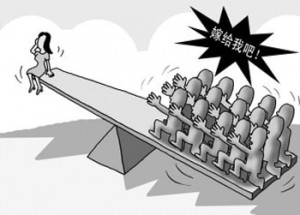 In 2011, I wrote an article for Worldpress.org titled “China’s Gender Imbalance” in which I described the possible long-term consequences of China’s one-child policy introduced in 1979.

The result of such draconian family planning? The selective abortion of girls, pressure to abort a pregnancy, and even forced hysterectomies.

I predicted that the large numbers of single Chinese men combined with the scarcity of available women would have future negative ramifications. My forebodings included damage to the mental and physical well-being of men who fail to marry, trafficking of girls to become prostitutes or brides in rural areas, an increase in sexually transmitted diseases, and overall social instability.

The Chinese Academy of Social Science estimates that by 2020, 30 million bachelors will be unable to find a wife in their own country. There are already “bachelor villages,” inhabited primarily by men, scattered across many of China’s poorer regions. The situation has gotten so bad that in some villages men are marrying their first cousins and even their sisters through deals made with relatives. The practice has become so common that some communities are referred to as “incest villages.”

Bottom line is that China’s overpowering preference for boys has put them in a real bind.

In order to negate the ticking bachelor bomb, China has decided to end its decades-long one-child policy. According to a recent statement from the Communist Party, couples will now be allowed to have two children. But that doesn’t solve China’s current  gender imbalance.

I would imagine that the wealthy Chinese man can just buy a spouse. Pay the “bride price” and obtain a wife. She’s chattel, and just another commodity like a car, land, or house.

But what’s a poor Chinese man to do?

Seems that Xie Zuoshi, an economics professor at the Zhejing University of Finance and Economics, has the solution—polyandry. One woman, multiple husbands.

Yes, Xie Zuoshi was quoted as saying poor men who cannot find wives should “bundle up to get one to share between themselves.”

And why do men continue to prey on the poor, uneducated women?