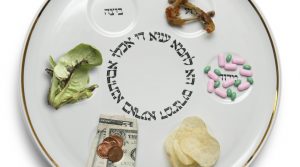 To him, we say, listen to the scientists, stay at home, and wash your hands. And ignore the ignoramus politicians shaking hands and crowding together on the podium.

To him we say, there’s always one like you in the family.

To him, we say, not if the wicked child has anything to do with it.

To him, we say, don’t worry, Governor Cuomo will speak on your behalf.

If He had given us Zoom, and Instacart and food delivery, it would have been enough. DAYENU!

3 thoughts on “The Passover Story During Coronavirus”